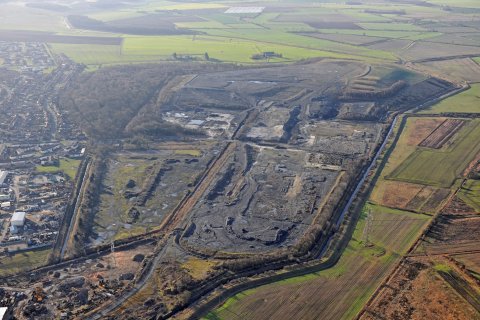 Caroline Flint said: “The UK Coal application as a whole is the kind of regeneration that was always in mind when the eco town was first proposed; and the plan makes use of a n existing brownfield site.  Crucially it opens up a western gateway – giving Rossington the direct link to the M18 that the village has always wanted.

“It is vital that the scheme provides for local jobs and apprenticeships and creates a good variety of new homes, to a very high environmental standard.

“At first glance, this scheme looks good for Rossington and good for Doncaster.  I hope residents will take an interest in finding out more about the scheme.”

Rossington Councillor Barry Johnson said:  “This is something Caroline and I have been championing for over a decade.  The airport was the first big step; more recently we have the Inland Port, which will create thousands of jobs and now this scheme spells the start of the regeneration of Rossington itself and building of the FARRRS link road.  Together these plans will change the South of Doncaster.”

Robin Hood Airport opened in 2005.  The FARRRS scheme – a link road between the M18 and Robin Hood Airport – includes a direct connection to Rossington.  The Rossington Inland Port, a major rail interchange, sitting on land adjacent to Rossington colliery, was given permission in September 2011.  The Inland Port is expected to create 5,500 jobs.  Rossington Colliery was the proposed location for one of the Eco-towns proposed during the latter years of the Labour Government.  The current plan for 1,200 homes is smaller than the original eco-town scheme.  In April, Doncaster gave permission for RecyCoal to clean up over 13 million tonnes of the colliery spoil heap, create 70 jobs and recover 950,000 tonnes of coal over 4 years, as the first phase of this scheme.