A Corbyn-May compromise can see off a No Deal Brexit 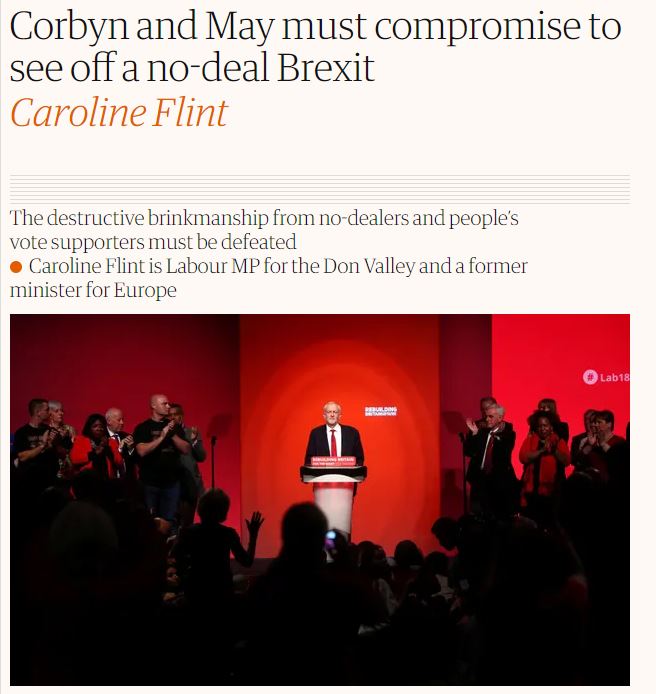 The train-wreckers in both main parties must be overcome to achieve a Brexit deal. Jeremy Corbyn and Theresa May must compromise to see off a No Deal Brexit.

I was reminded this week of the film Unstoppable, where a runaway train threatens disaster; and Denzel Washington and Chris Pine must save the day. Our Brexit train is truly out of control. Not only is any route to Brexit subject to attempts to frustrate it, there is no agreement over who should drive the train.

The Tory European Research Group reminds MPs that leaving with no deal is the default outcome if nothing is agreed. The no-deal Brexiteers would have the UK leave with no agreement on the money the UK owes, EU citizens, the Northern Ireland border, tariff-free trade or security arrangements.

Their destructive strategy is appalling; it’s matched by the tactics of the so-called “people’s vote” supporters, a minority on Labour’s benches. They, too, favour wrecking any deal, gambling on Theresa May losing her nerve over a no-deal Brexit and, at the final hour, “taking no deal off the table” by extending article 50. A postponed Brexit makes a second referendum more likely. After having denounced a hard no-deal Brexit, they are willing to risk that very outcome.

I’m dismayed by the procedural games and self-righteous pleas to give “parliament control” of the Brexit train; not to reach a destination, but to derail it before 29 March. The “derailers” have always sought to overturn the 2016 referendum. Few had the principles to state their true intentions to their own voters at the 2017 general election.

Parliament is in a mess. The May deal was rejected, opposed by a third of Tory MPs. Jeremy Corbyn rightly tabled a motion of no confidence; but defeat was always likely, with the Tories and DUP refusing to bring down the government.

This Brexit brinkmanship could end badly for Britain. We should be afraid. Parliament is about to commit an act of self-harm against the nation. And parliament will face the electorate’s wrath for not working together to sort it out.

A no-deal Brexit catastrophe can be avoided, but the train-wreckers in both main parties must be overcome to achieve a deal. Ultimately, a Corbyn-May compromise is necessary for this train to complete its journey.

I warned Theresa May that she had to reach out, not just to “senior parliamentarians”, but to the leader of the opposition; today the most important person in the Brexit process. Because without Labour, there is no deal.

Both must dial down the invective directed at each other. They, more than anyone, feel pressure not to compromise. But compromise they must.

How do we fix this mess? I was among eight Labour MPs who lobbied the government to guarantee workers’ rights and environmental protections after Brexit, and to consult the trade unions. As a result, the prime minister spoke one-to-one with trade union leaders for the first time in her premiership.

We need more of this. A dialogue about substance, not just process. A real conversation with Corbyn about what is possible. Corbyn should not impose any precondition on talks.

A passage in his Labour conference speech was significant: “Let me also reach out to the prime minister, who is currently doing the negotiating. Brexit … is not about leadership squabbles or parliamentary posturing. If you deliver a deal that includes a customs union and no hard border in Ireland, if you protect jobs, people’s rights at work and environmental and consumer standards – then we will support that sensible deal.”

Not impossible red lines, but a starting point for a conversation.

May could confirm legislation to enshrine the workers’ rights we currently share and give parliament a vote should those rights be strengthened by the EU. In one step, May would confirm that parliament is in control, and rule out a race to the bottom.

May could make similar commitments on environmental protection, equality and human rights. All deliverable without requiring the consent of the EU 27.

A permanent customs union is difficult for May’s party. This issue appears intractable. But both leaders need to look to the long term.

May should offer to explore the implications and choices with Labour, with opposition access to government officials. Perhaps even a Labour seat at the government’s briefings at the start of, and throughout, stage two negotiations.

A trade and security agreement will not be implemented until 2021. If the final agreement falls short of Corbyn’s aspirations, he can prepare for new talks as prime minister after the following general election.

Is the gap between the government and Labour too large to permit an agreement to avoid a no-deal Brexit? I don’t think so.

The UK is set to leave on 29 March. Any other outcome would undermine trust in the political system.

As Jeremy Corbyn said: “This is not about leadership squabbles or parliamentary posturing.” I agree. It’s time for compromise: and only two people can save the day.

This article was first published in the Guardian Online, Saturday 19 January 2019.