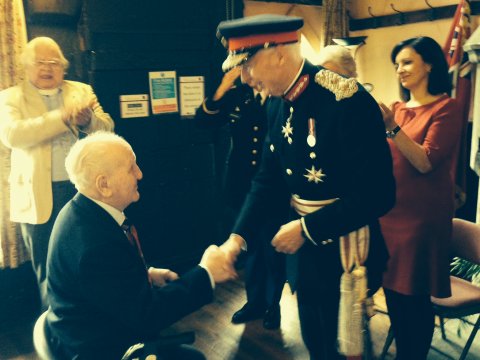 Albert Burkill’s 69 year wait for his Atlantic Star service medal, for serving in the merchant navy during World War Two, came to an end this weekend as the Lord Lieutenant of South Yorkshire, David Moody, and local MP Caroline Flint joined parish councillors and representatives of the Merchant Navy Association to mark the occasion.

PHOTO SHOWS:  The Lord Lieutenant presents Albert with his Atlantic Star medal.  The Rev Sweed and Caroline Flint look on.

Said Caroline: “We owe a debt of thanks to the Rev John Sweed and US army veteran Gordon Whitehead, who pursued the Ministry of Defence to obtain this medal for Albert Burkill.  It is incredible that Albert has waited until 94 years of age to receive this recognition. 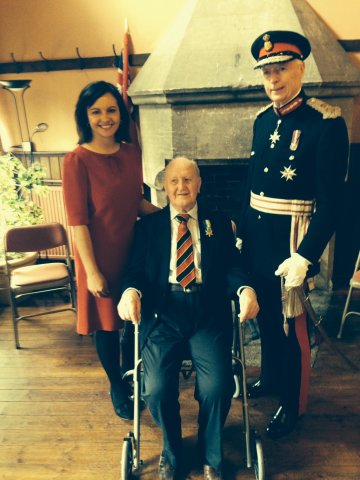 “For three years during that war, Albert worked on ships transporting petroleum as part of the Atlantic convoys.  It was dangerous and uncertain work, and 30,000 of those brave men were lost.

“The presentation of the Atlantic Star is recognition of the incredible role of the seamen of the merchant navy, without whom we could not have won that war.”

Said Rev John Sweed: “It was only six months ago that I first found out from Albert that he did not have a medal from his war service in merchant navy.  With the help of Gordon Whitehead, a retired US Army Lieutenant Colonel, we contacted the Ministry of Defence and the result is Albert now has Atlantic Star.”


PHOTO: Caroline and the Lord Lieutenant, David Moody, stand beside Albert.  In the background is the Merchant Navy flag.