Andy Burnham thanks Doncaster for support for NHS

Shadow Secretary of State for Health has welcomed support from Doncaster politicians for their support for the Drop the Bill campaign. 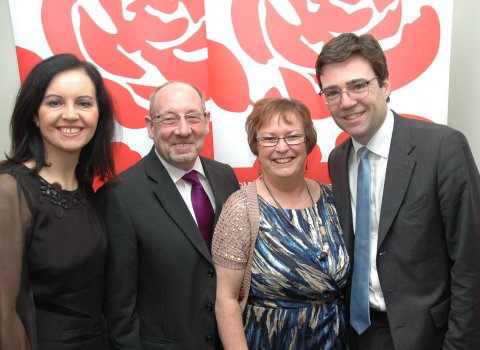 Mr Burnham told  a packed Labour Party dinner at Castle Park:  “I am grateful for your support for our NHS.  As the cost of this reorganisation grows –  £3.3million and rising in Doncaster alone and set to cost £3.45billion across the country  – so the support for the Government’s Bill is collapsing.  GPs, nurses, consultants, midwives, radiologists – in fact organisations representing millions of NHS staff, patients and the public – stand opposed to a Bill for which the Government has no mandate.  It is time for the Government to listen to the public and end this fiasco.”

Said Caroline Flint:  “It’s clear that with over £10million spent on NHS redundancies just across South Yorkshire, this is not a price worth paying, when the health professions are opposed to the Government’s changes.  I’m proud to have signed the Drop the Bill petition, which already had the support of over 150,000 people.  This unnecessary and costly reorganisation is happening while our NHS has lost 3,500 nurses and A&E waiting times targets have been missed for 8 weeks running.  Can there be any doubt now that our NHS, in Doncaster, and across the country, is feeling the strain of a reorganisation that no one needs.”

Said Cllr Pat Knight, Chair of Don Valley Labour Party: “Andy Burnham’s efforts nationally and Caroline Flint’s efforts locally to stand up for our NHS have our full support.  I hope everyone will sign the epetition to call for the Health and Social Care Bill to be dropped.  I hope more Doncaster people will add their voice.”

Don't forget to let Caroline know if you have signed the petition.  Send an email to caroline@labourisworking.org saying "I've signed".  Just put your name and postcode, such as Bill Thompson, DN7.