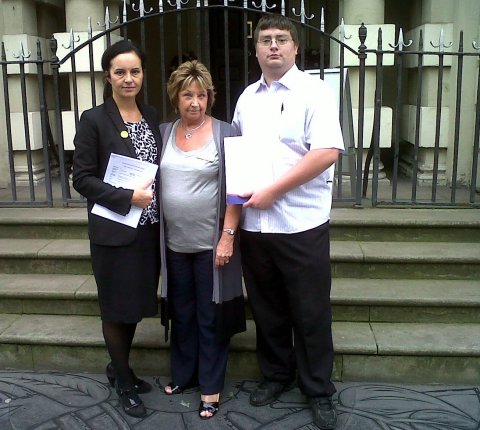 Labour campaigners raised residents concerns about the re-opening of the Nearcliff Quarry on Doncaster Road, Conisbrough.

Cllr Elsie Butler, Caroline Flint and local campaigner Patrick Cawkwell attended the committee along with residents from Ravens Walk and Doncaster Road Conisbrough to hear plans for the re-opening of Nearcliff Quarry, last worked by Steetley Minerals in the 1970s.

The planning application by Taylor Woolhouse Holdings Ltd to excavate over 1million tonnes of limestone and limestone waste, over a period of 8 years was similar to an application which was refused in 2007.

and Patrick Cawkwell taking residents concerns to the Mansion House.

The new application alters the access road on Doncaster Road and consulted Natural England over the impact on the SSSI Nearcliff Wood adjacent to the quarry.

Cllr Elsie Butler, who was allowed to speak on behalf of protesters, urged the committee to delay a decision to allow for further consultation with residents after very short notice of the committee meeting was given to residents.  She also urged that a liaison committee be established to meet regularly with local councillors and residents to address concerns.

Said Caroline:  “This planning application has been waiting since it was first submitted in 2007 and had disappeared from view only to be brought to committee this week to the surprise of residents.”

Said Cllr Butler:  “I felt it was important to speak about the residents concerns, given the history of mistrust about workings at this quarry.  Fifteen  years ago, the quarry was worked without permission – so residents are very worried about the developer complying with the law.”

Residents are worried by the increase in HGV traffic on Doncaster Road and the impact of noise and dust.  Detailed conditions have been put in place to mitigate the disturbance and nuisance to residents.

As the excavation progresses, the quarry will be restored in two phases, with the aftercare lasting some 15 years after work is finished.