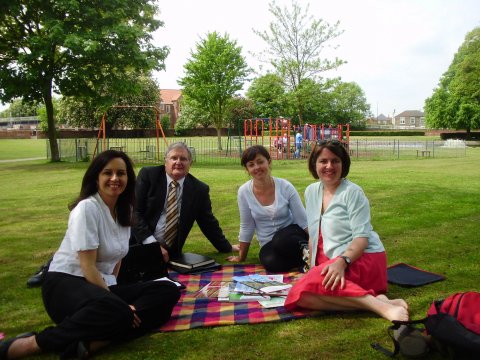 Caroline Flint and Cllr Eddie Dobbs have expressed support for establishing a Friends of Thorne Park group after meeting local parents, Danielle Walton and Emma Wilson, to discuss plans for new play facilities at the park.

Said Caroline:  “Thorne Memorial Park is a great asset to the town, and the £51,000 funding from the last Government’s Playbuilder fund gives a great opportunity to improve facilities, particularly for older children.

Caroline said:  “Most important is that whatever funding is used, it is important that residents who feel a real commitment to the park can play a part in supporting it in the future.”

Said newly elected councillor Eddie Dobbs:  “I’m very optimistic about plans for the park, and support the idea of adding Section 106 money to produce something really exciting.  But I’m also committed to involve people.  After all, this is about the parents and children who want to use the new play facilities.”

Danielle Walton said:  “It was great to meet Caroline and have her support.  Her positive attitude was a breath of fresh air.  I was also delighted that newly elected Cllr Eddie Dobbs has expressed support and given us really helpful advice.”

Ms Flint said further meetings would be taking place on the future of play facilities at the park.