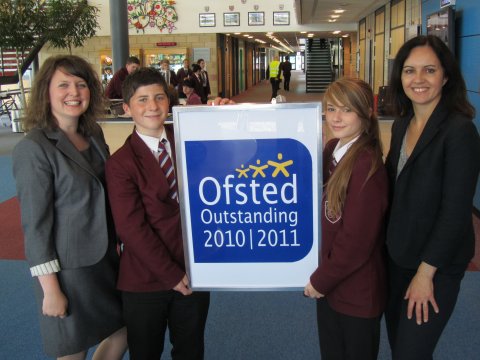 Said Caroline:  “It was fascinating to be shown round the school without staff or pupils having any prior notice or any special preparation.  This is a happy, well organised school and the growing numbers staying on in the Sixth Form and going to university testifies to its ‘Outstanding’ OFTED award.”

Said Rachel:  “The school sports facilities, including the new fitness suite, are very impressive; and are widely used by the community.  But for me the most impressive aspects of the school are the simple things it has got right.  It has two restaurants serving school lunches, which run three meal times to manage over 1200 pupils; and the library is open from 7.30am and doesn’t close until the homework club finishes at 6pm.”

Said Caroline:  “Trinity seems to produce self-confident pupils who develop a range of talents, whether it is photography; the performing arts; or completing the Duke of Edinburgh Award.  The school’s subsidised trips to South Africa; the week on a Tall Ship or the trip to New York and many others ensure that these young people get to see a world beyond Doncaster and learn in the process.” 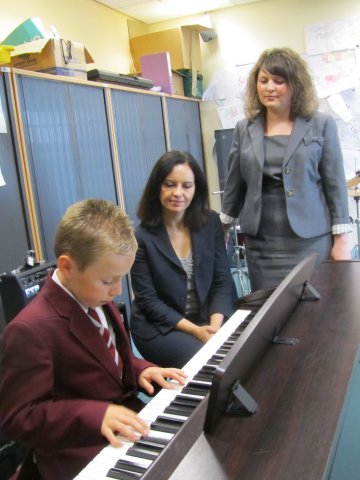 Trinity Academy is the most improved school or academy in Yorkshire and the Humber.  Its latest OFSTED was “outstanding”.  The school’s GCSE pass rate for 5A*-C grades in 95%, with 63% achieving at least 5 GCSEs including Maths and English.  In 2010, 61 Trinity students went to university, five times the number that did so in 2006.  In 2010, over 250 pupils progressed to Sixth Form and in September 2011 the Sixth Form intake will rise to 300.

PICTURES SHOW: Matthew Davenport performs the melody from Adele’s Rolling in the Deep for Caroline and Rachel.