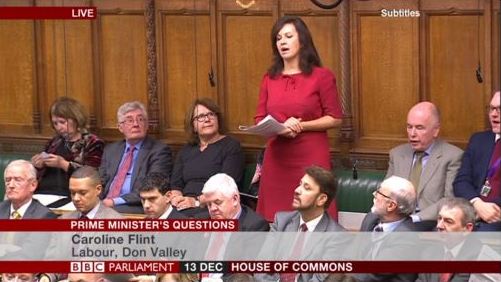 The MP reminded Mrs May that in June she had told the Commons she wanted “no one and no community left behind”.

Ms Flint told the PM: “The Doncaster market towns of Thorne and Bawtry are facing closure of their NatWest branches.

"Two more on top of a record breaking 700 bank branch closures this year; despite the Big Four Banks delivering £13.5 billion half year profits.

“Will the Prime Minister admit that the Government’s Access to Banking Protocol has failed to keep branches open?
Will she restore the bank levy and use some of it to stop communities losing their last bank branch?”

Experts have forecast over 700 bank branch closures in 2017; and RBS recently confirmed a further 199 NatWest branches and 41 RBS branches are to close.

Speaking after the debate, Caroline said: “In March 2015, the Government announced an Access to Banking protocol after a series of bank closures. Yet 461 branches closed that year, 583 in 2016 and now over 700 in 2017.

“While the big banks cluster branches in large town and city centres, our small towns are being badly left behind.

“Bawtry is now losing its NatWest branch, the last bank in the town. The Government could have restored the bank levy and used just a small part of it to keep the last branch open in our market towns and rural areas.

“If what is happening here is banks retreating from towns and communities with less than 10,000 people; then we are going to see even more communities left behind.

“The evidence suggests that 90% of closures are in communities with lower than average incomes; while some banks expand their services in wealthier communities. This is unacceptable.”

Bawtry’s NatWest branch will close on 30 May 2018, the last bank in the town. The neighbouring market town of Tickhill lost its last bank (HSBC) in April 2015. Thorne will lose its NatWest Branch on 5 June 2018. In June, its HSBC branch closed.

In June 2016 Reuters published evidence that 90% of closures were in poorer communities.
https://uk.reuters.com/article/uk-britain-banks-branches/britains-poorer-communities-hit-hardest-by-bank-closures-may-face-shutout-idUKKCN0Z60BP

On 14 June 2017, Theresa May told the Commons “the challenge of spreading opportunity and prosperity to every part of our United Kingdom, so no one and no community is left behind.”

In 2017, the Big Four banks (Lloyds, Barclays, HSBC and RBS) posted £13.5billion profits for the first half of this year; and £6.99 billion third quarter profits. The Bank Levy was reduced in 2015. This year, restoring that cut would have raised an extra £4.7billion.