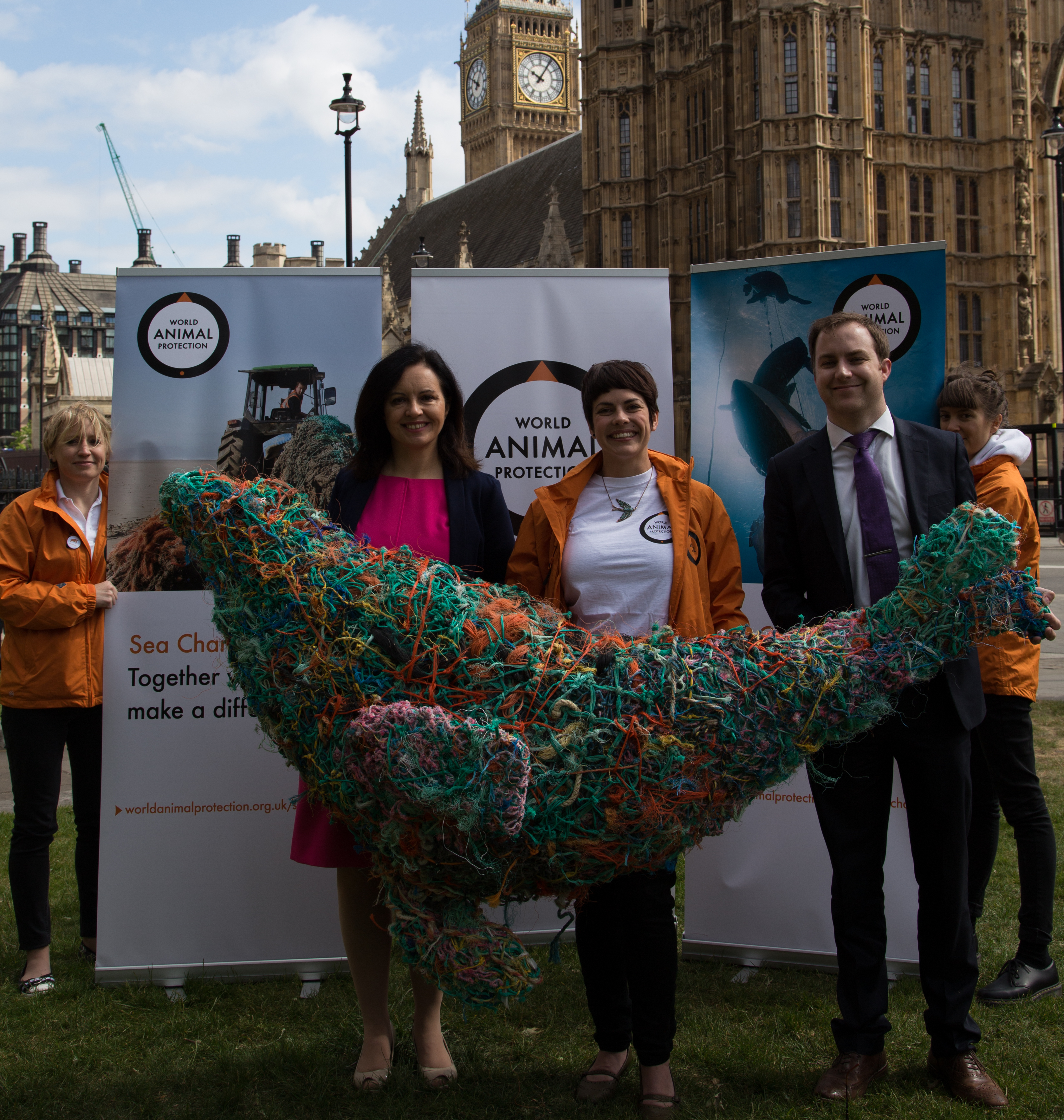 The Don Valley MP has thrown her weight behind World Animal Protection’s Sea Change campaign which aims to end the devastating impact of ghost fishing gear on marine mammals and wildlife.

The MP posed with campaigners with a model of a seal made of discarded fishing gear.

Said Ms Flint “Ghost fishing gear, the discarded or abandoned fishing equipment or netting that litters our oceans, has a devastating and deadly effect on marine mammals.

“Most fishing gear is made out of plastic meaning that it persists in the oceans for centuries, accumulating year on year. I was shocked at the World Animal Protection estimates that more than 136,000 seals, sea lions and large whales are killed by ghost fishing gear every year.  From this research we also know that huge numbers of birds, turtles, fish and other species are also injured and killed. In the UK, seals, minke whales, seabirds and dolphins are at particular risk.

“I hope this campaigning encourages local beach users, coastal walkers, divers and ocean lovers to send evidence of ghost fishing gear that is littering their local coastline to their MPs, demanding action.

Britain has a fantastic coastline, and I hope ask the public to look for any type of fishing litter, such as rope or netting, collect it, take a photo and upload it on the World Animal Protection website, then dispose of it safely in a bin. All of the photo uploads will then be used by World Animal Protection when meeting with Government and seafood companies to discuss the devastating impact of this problem on the environment.”

Alyx Elliott, UK Sea Change Campaign Manager at World Animal Protection said:“Ghost gear is one of the biggest threats to sea life. Whales, seals, turtles and birds can suffer slow and agonising deaths when they get trapped in ghost nets and other types of fishing litter.

We are grateful that Caroline Flint joined us to support our Sea Change campaign.”

World Animal Protection is also asking members of the public to email their digital postcard to the Minister for the Marine Environment, George Eustice, requesting he prioritise the impact of ghost gear.

PHOTO - TIME FOR A SEA CHANGE: Caroline Flint with the Sea Change campaigners at Westminster.

Ghost gear represents one of the biggest threats to animals in our oceans, entangling, injuring and killing millions of animals every year.  An estimated 640,000 tonnes of fishing gear – around 10% of total marine debris – is added to our oceans annually.