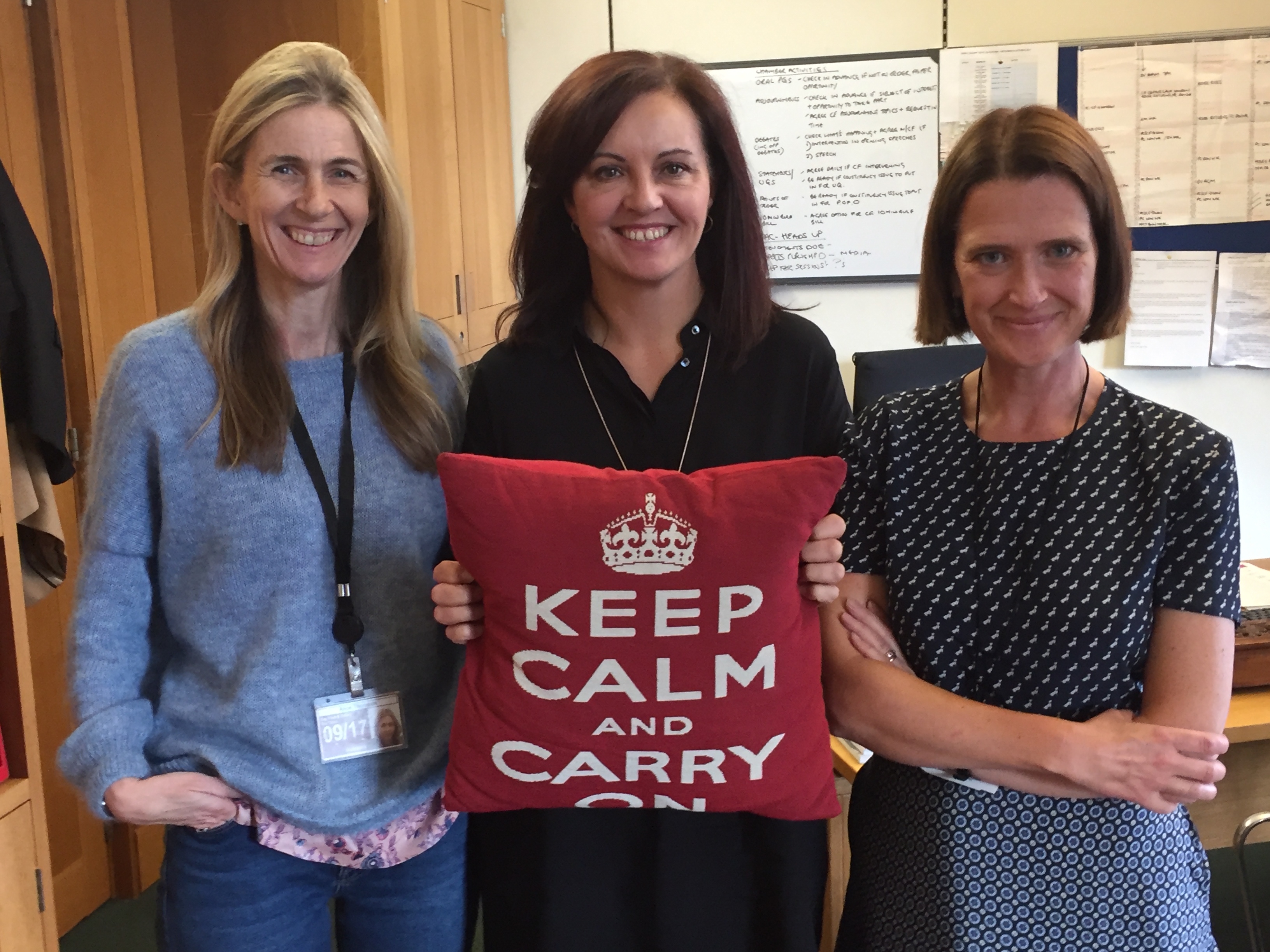 Caroline Flint has never been afraid of being the odd one out. When the New Labour lads were all playing football, she founded a tap-dancing troupe called the Division Belles. Other male MPs appoint their wives as their secretaries; her husband, Phil, is her constituency manager — she proposed by fax and he accepted with a pager message.

She is a southerner who represents the northern seat of Don Valley, in South Yorkshire; a working-class girl who inhabits a middle-class world. The daughter of an alcoholic single mother, she learnt independence at an early age. “I’m not a trouble-maker but I’ve always wanted to be true to myself, and if that sometimes means I’m not going to follow the script — well tough,” she says.

This week Ms Flint, a former Europe minister, was heckled by her Labour colleagues when she refused to follow the party line and announced that she would be abstaining on the government’s EU (Withdrawal) Bill. A moderate Blairite, she found herself on the same side as the veteran leftwinger Dennis Skinner and the fogeyish rightwinger Jacob Rees-Mogg.

“I campaigned for Remain and voted Remain in a constituency where I knew the majority of people would vote to leave, but having had the referendum result, my view is we have to get on with it,” she explains. “For me it’s a democratic issue. What if it had been the other way around and Remain had won by 52 per cent? How would those of us who had campaigned for Remain be reacting to the same sort of insurgency among Leave voters to say we need to do it all over again?”

Although she opposed Brexit, she understands why many of her constituents supported it. For too long, she says, Labour ignored the concerns over immigration in its industrial heartlands. “We created a vacuum of discussion which allowed Ukip and their type of politics to take hold. It’s about communities that don’t feel part of the renaissance of Britain.”

Her worry now is that the divisions in the country caused by the referendum are being entrenched by the rows about Brexit. “We need to make the best of it. I’m not naive about the challenges but I do think that the extreme rhetoric on both sides is really not helping. There has to be some healing of those divides.”

‘There is both on the far left and the far right an intolerance, seeing life in a very cardboard cutout way’

It was, she admits a “weird feeling” to be heckled by her own colleagues after 20 years as an MP. “To be honest I think it reflected badly on them because it showed a lack of willingness to hear other points of view,” she says. “What worries me is the amount of anger and intolerance. People are very angry and this anger is destructive in the long run.”

With Labour dominated by the hard left and the Tories pursuing a hard Brexit, the centre ground appears to have been hollowed out. “I think there is both on the far left and the far right an intolerance, seeing life in a very cardboard cutout way,” she says. “It’s very black and white, there’s no shade . . . life isn’t really like that.”

Since being elected in 1997 — one of the so-called Blair babes — she has seen a coarsening of the tone of political debate. She is constantly shocked by the personal attacks levelled at her on social media. “You get things like, ‘You’re a Tory, you’re a millionaire.’ I just think, ‘You don’t know anything about my background.’

“I think there is a wider problem across society about how we engage and discuss issues. Where you have influence — whether you are a leader of a party, or the prime minister or the editor of the Evening Standard who was quoted saying he wanted to chop Theresa May up and put her in his freezer — I think you have some responsibility about what you add to the tone of the debate.”

There is in her view a strong whiff of sexism in the treatment of female MPs and journalists such as Laura Kuenssberg, the BBC political editor, who needed a bodyguard for the election campaign.

“What happened to Laura was unacceptable. On the one hand she gets comments from Conservatives saying ‘You’re too left-wing’ and on the other from people on the left saying ‘You’re too right-wing’. She’s probably getting it right if that’s the case.”

There are a lot of violent, sexist people out there who have probably always been there but they’ve almost been given permission

Ms Flint noticed a stark difference in the messages to her and Mr Skinner this week. “With me it was, ‘Get her out of the Labour Party, she’s a Tory,’ whereas with Dennis it was confusion — ‘What are you doing?’ There’s definitely misogyny as well as a certain left-wing judgment of moderates like me.”

There are frequent rape threats and death threats against women on Twitter. “I think it says that there are a lot of violent, sexist people out there who have probably always been there but they’ve almost been given permission . . . to do these things.”

Social media companies have a responsibility to tackle online abuse, she insists. “As parents we always say, ‘Don’t hide the bullies, speak up, go and tell a teacher.’ You can do that because you point at them. On social media it’s a refuge for bullies and they’re going to have to think about what they do about that.”

Twitter and Facebook should in her view ensure they know the true identity of all users. “At the moment everybody can hide behind some made-up name . . . Unless that happens I find it hard to understand how we’re ever going to stop it apart from all switching off and leaving them to fester in their own little bubble of bile and anger and hatefulness.”

There is plenty of that in the Labour Party before the conference season. The Corbynistas want to deselect moderates including Ms Flint but she is not looking for a fight over the leadership. “There’s no doubt about it, Jeremy has exceeded people’s expectations. In the general election campaign he reached into parts other leaders haven’t reached into . . . I see no reason why he won’t be leader at the next election.”

But with the Corbyn surge an overwhelmingly middle-class phenomenon, she fears that constituencies like hers will feel increasingly alienated from her party. “I think we have lost touch with some of that working-class support.”

The Labour MP Laura Pidcock said recently that she could never be friends with Conservatives because they were the enemy. “I wouldn’t be unfriendly to Tories,” Ms Flint says. “At some point she will be sitting on committees where the truth is you end up working with Tories who share the same view as you.”

She has never felt an insider. This is partly a result of her childhood. Ms Flint’s mother gave birth to her when she was 17, in a home for unmarried mothers, and started drinking heavily when Caroline was in her teens. She died aged 45 of liver failure.

I’ve never had a sense of entitlement at all. I still feel I have to prove myself

Ms Flint was the first in her family to go on to higher education. “I had a feeling when I was a girl that somehow if I could just get to university I could change my choices around. University for me wasn’t a destination, it was an escape.” Her first marriage to a Tunisian stockbroker — another attempt to “reinvent her life” — ended bitterly, with her bringing charges of violent disorder.

It took Ms Flint years to talk about her background. “When I became an MP I probably felt a bit ashamed and worried that people would judge me,” she says. But the struggles she went through have also given her strength. “There’s a certain resilience in all that . . . More than anything else I wish my mum was here and that never goes away but I would have to admit that one of the impacts on me is that I’m quite a tough-love sort of person.”

Although she can be strident — she stormed out of Gordon Brown’s cabinet in 2009, claiming she was being treated as “female window dressing” — there is a vulnerability underlying the steeliness.

“People say, ‘She’s really tough and holds her own,’ but it’s a certain type of confidence that is quite hard fought. It’s not that I feel I can just do what I want to do at the drop of a hat.”

She is, in a sense, still fighting for survival.

“I’ve never had a sense of entitlement at all. I still feel I have to prove myself.”

Born September 20, 1961
Educated Twickenham Girls School, Richmond Tertiary College, University of East Anglia.
Career Worked in local government and at the National Union of Students before becoming the political officer for the GMB union. Was elected MP for Don Valley in 1997 and served as health, employment, housing and Europe minister*. Shadow communities secretary and shadow energy secretary under Ed Miliband. Resigned from the front bench in September 2015.
Family Married to Phil Cole. She has two grown-up children from her first marriage and one adult stepchild.
*Correction: Caroline Flint was also a Home Office minister 2003-5, her first ministerial post.