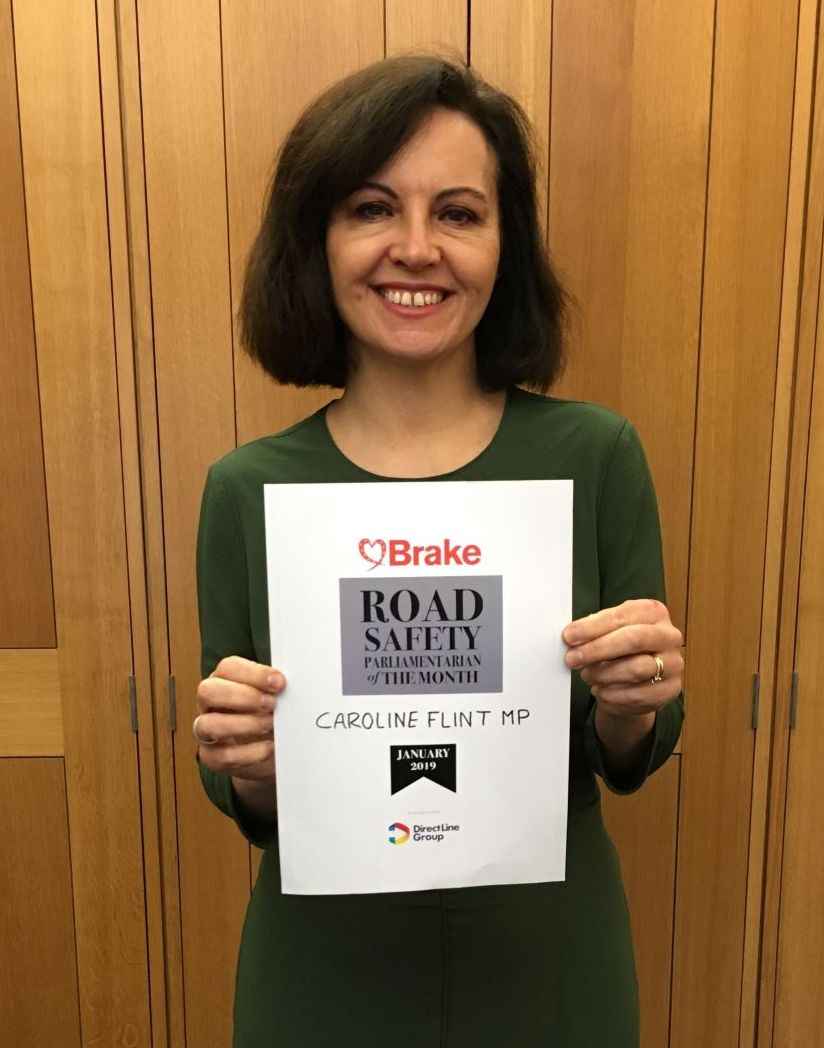 Road safety campaigner Caroline Flint has been named as Road Safety Parliamentarian of the Month for January 2019 by Brake, the road safety charity, and Direct Line Group.
The award recognises Caroline’s efforts to improve road safety in her constituency by successfully campaigning for a lower speed limit on Ashton Lane, a single carriageway rural road coming into the village of Braithwell, after concerns were expressed about cars speeding through the village.
Alongside local residents, businesses and councillors, Caroline co-signed a joint letter to the Highways Department at Doncaster Council calling for the speed limit be lowered on the dangerous road. Following pressure from Caroline and local road safety campaigners, Doncaster Council agreed to reduce the limit from the previous 60mph national default to 40mph.
The award also acknowledges Caroline’s enduring commitment to road safety in her constituency. Her campaign for a new footpath for the route to local schools, on behalf of residents of the Pembridge Park estate, was successful, with the path being completed last October. The MP also helped secure a new 30mph limit by Hayfield School and New College.
Brake has long called for speed limits to be set for safety as part of a safe systems approach. Most rural roads in the UK have a 60mph limit, the national default for single carriageway roads, however, such roads are often unsuitable for high speeds as they are narrow, with blind bends, and no pavements or cycle paths. Brake is seeking a reduction in the national default limit to deliver slower, safer roads.
Accepting her award, Caroline said:“It is a great honour to be named a Parliamentarian of the Month by Brake. None of my road safety victories have been mine alone, however.  I have been indebted to the support I have received from parish councillors; from schools and from active residents, like those on Pembridge Park, Hayfield Green who highlighted the problem of walking children safely to school.
“Without those residents, these victories would have been fewer in number and our roads a little less safe than they are today.  I am convinced that communities know best the dangers and the speed limits they need to make their community a safer place and I will always champion their right to have more say.
“I am not complacent, there are more battles to be won, and I know that in Brake, an organisation that has always relied on painstaking evidence to build a case for road safety, I have a great resource and a great ally.”
Joshua Harris, director of campaigns for Brake, said:“Brake is delighted to recognise Caroline’s commitment to road safety in her constituency with this award. Her campaign to tackle rural road speeding and lower the Ashton Lane speed limit to 40mph, from the default 60mph limit, should be commended, as should her enduring commitment to road safety. Many people are surprised to hear that most British road deaths take place on rural roads but for those who live near these roads it is no surprise and so it is great to see Caroline and the local community taking action to improve rural road safety.
“Rural road safety is a key focus of the Government’s new two-year road safety action plan. The Government must grasp this opportunity to improve rural road safety and introduce a lower default speed limit.  Slower speeds save lives and help make our streets more liveable environments for all.”
Gus Park, Managing Director of Motor Insurance at Direct Line Group, said: “Caroline’s actions are vital to the safety of the local residents. Her campaign to reduce the speed limit on this road will have a major impact on making this road safer for everyone who uses it and we are very grateful to Caroline for her commitment to making it happen.”
Caroline Flint road safety award Brake Direct Line parliamentarian