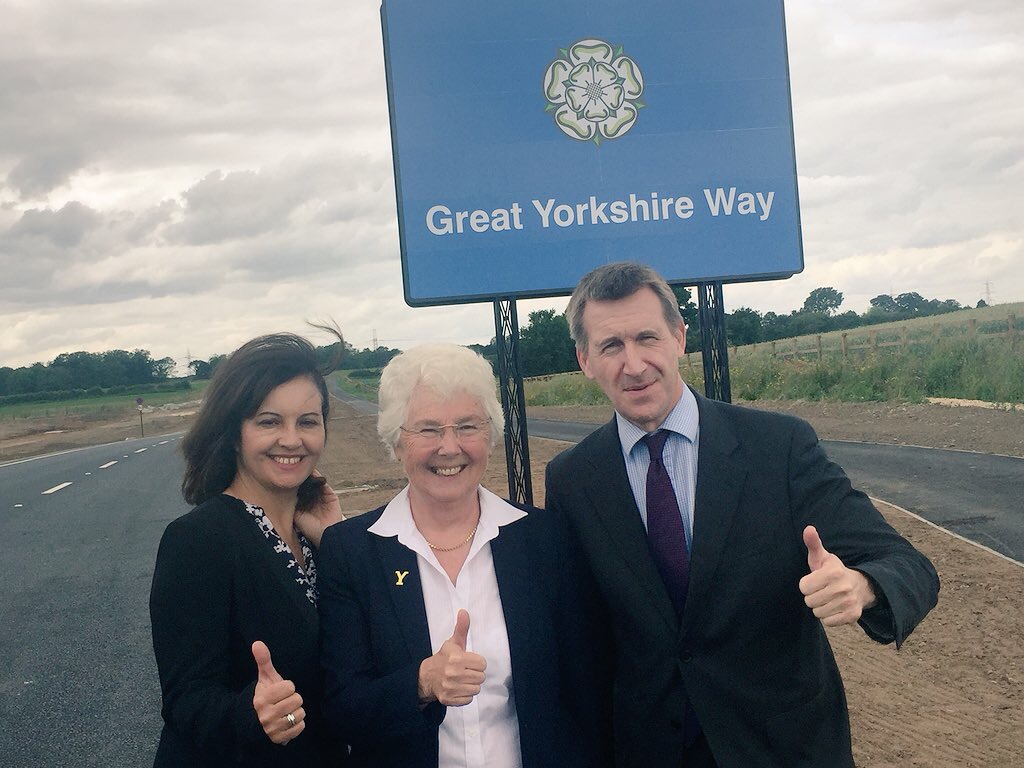 The final leg of the Great Yorkshire Way, from the 9 metre Y sculpture at Parrot’s Corner to Hurst Lane, was officially opened by Mayor Jones, after 18 months of construction by Tarmac.

Said Caroline Flint, who pledged support for a link road for Rossington in 1997, said: “For me this is the completion of a 21 year project. A few years ago, if anyone had said that a four mile stretch of road would make such a different to jobs and travelling to work; no one would have believed you.

“But this road has brought 1 million more holiday-makers closer to our airport; residents closer to jobs; and brought jobs to Doncaster’s doorstep. The Great Yorkshire Way is a great asset to our borough.

“This final mile is a symbol of the journey Doncaster is on, bringing new jobs, new businesses and tourism to our borough.” 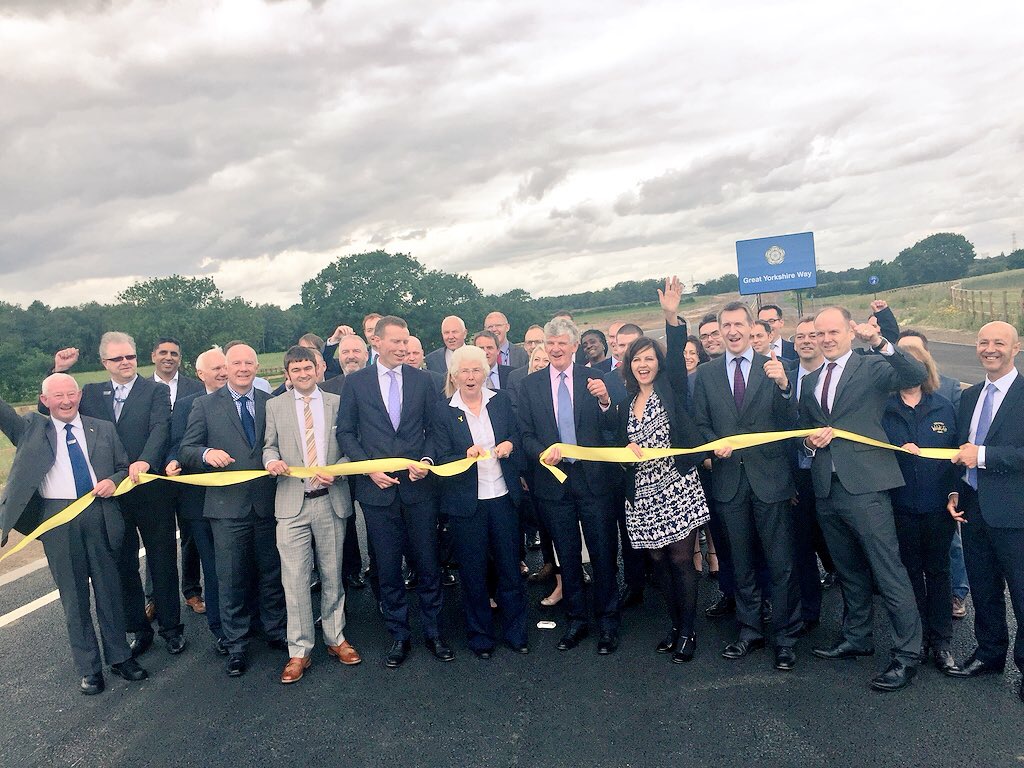 Ros Jones, Mayor of Doncaster, said: “As we had hoped, Great Yorkshire Way is a fantastic success for Doncaster and the wider region. We always knew its impact would be hugely significant and lead to hundreds of millions of pounds of private sector investment in Doncaster. There are more flights to business and holiday destinations, the old colliery site at Rossington is being reclaimed and people are living in new family homes and finding more job opportunities at the iPort and other developments.

“Over 1,400 new jobs and almost 1,000 new homes have been created and this is all due to the collaborative approach we’ve taken to working with our public and private sector partners. With the second phase of the Great Yorkshire Way now complete, stimulating further economic growth and making the borough even more accessible to the people of Yorkshire and beyond, Great Yorkshire Way is one of the region’s most successful regeneration projects, investing in infrastructure in order to grow and transform the economy so that it works for the many not the few.”

Dan Jarvis, Mayor of the Sheffield City Region, said: "For a relatively short piece of road, the final stage of the Great Yorkshire Way will have a huge impact. Directly linking Doncaster Sheffield Airport (DSA) to the motorway network will make DSA far more accessible for people across the region. Our airport is already seeing success in terms of new routes, rising passenger numbers and an increased demand for cargo facilities. But there is further potential. I know that DSA can be as significant on the east of the Pennines as Manchester Airport is on the west. 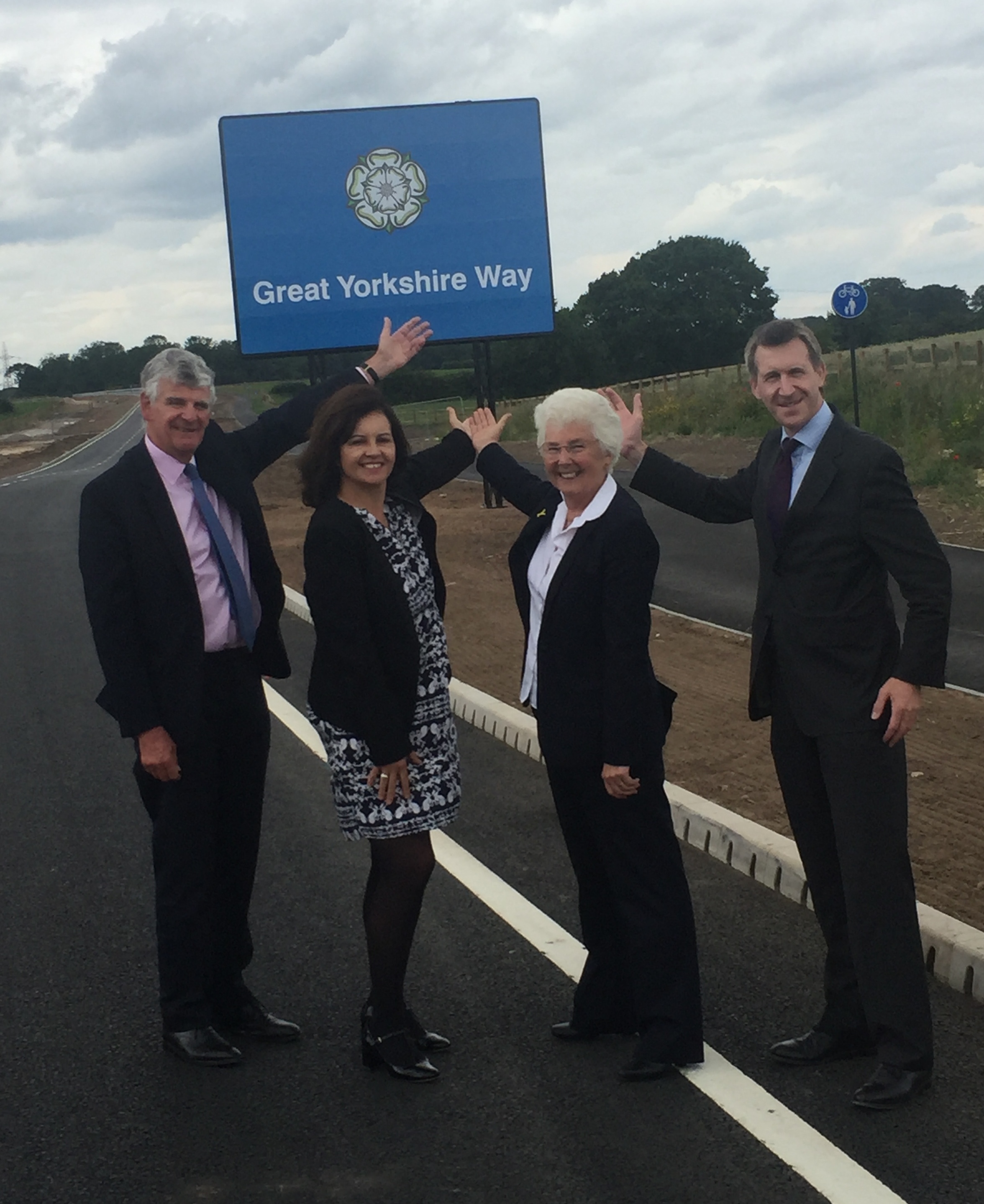 "To help realise DSA’s potential, I've already submitted a bid to the Government's Transforming Cities Fund. At the heart of this bid is a Global Innovation Corridor that stretches across the region, linking people to key sites including the airport, Sheffield city centre, the Advanced Manufacturing Park in Rotherham and Barnsley’s Digital Campus.

"And now we need to seize this momentum and also throw our collective weight behind the vision for an East Coast Main Line railway station at the airport.”

The final leg was delivered by Doncaster Council, backed by the Sheffield City Region, creating a continuous, high quality route to south east Doncaster from Junction 3 of the M18, reducing journey times for residents and boosting opportunities for local businesses to create more jobs.

Sir Gary Verity, Chief Executive of Welcome to Yorkshire, said: “Seeing the opening of this significant stretch of road is a huge boost for Doncaster, and for Yorkshire as a whole. The benefits it will bring to the county are numerous and it was a privilege to be able to showcase it during this year’s Tour de Yorkshire.

“The Yorkshire Gateway is already regarded as one of the county’s landmark sculptures and the road itself will support the growth of Doncaster Sheffield Airport and improve tourism links for many decades to come."

The £56 million first phase of Great Yorkshire Way opened on 29 February 2016. It provided a new three mile link from Junction 3 to the A638 Bawtry Road and since opening has been used for almost 14 million journeys. It was funded with contributions from Peel Group, Harworth Group, Verdion, Doncaster Council and the Regional Growth Fund. This helped DSA to enjoy its best year of business since opening in 2005. Verdion’s £500million iPort has seen high quality space taken by Amazon, Ceva, Fellowes and Lidl and has also opened its new rail freight interchange – iPort Rail. Housing sites are being developed by the Harworth Group in Rossington and by Peel in Auckley.

The second phase of Great Yorkshire Way cost £10.55million with £9.1million contributed by the Sheffield City Region and £1.45million from Doncaster Council’s Capital Programme. Funding has come from the Local Growth Fund (LGF), which is Government funding awarded to Local Enterprise Partnerships (LEPs) for projects that benefit the local area and economy.