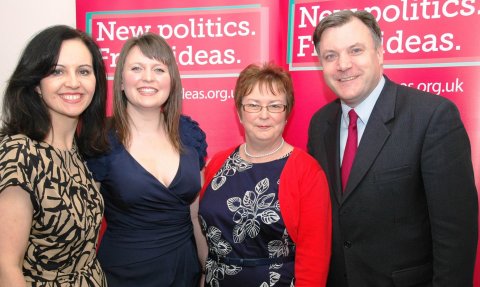 Labour’s council candidates for Hatfield and Thorne wards have asked Ed Balls to ensure that jobs and recovery is top of his priority list.

Pat Knight and Rachel Hodson, Labour’s candidates for Hatfield and Thorne, spoke to Ed during his visit as the special guest at Don Valley Labour Party’s Annual Dinner held on Friday at the Castle Park Conference Centre.

Said Pat Knight: “I told Ed Balls that all of David Cameron’s talk of recovery doesn’t mean a thing if it doesn’t deliver any jobs.  The recovery has to be about more than bankers making money again; there are too many young people out of work and the Tory-led Government is slamming doors in their faces.”

Said Rachel Hodson:  “Ed was very sympathetic when I told him that Thorne has a range of firms that employ a lot of local people, but they need to see recovery.  I also said that with so many public sector workers losing jobs, Thorne’s town centre may lose trade as people draw in the purse strings.

“Ed spoke passionately about the need for jobs and I’m convinced he is going to give George Osborne the hard time he deserves.”

Ed said:  “It was great to meet Rachel Hodson and Pat Knight, who will be formidable candidates.  They have already been out on doorsteps highlighting the unfairness of the VAT rise.

“The points they made about jobs were very strong.  I want everyone in Hatfield and Thorne wards to know that, in my view, a recovery without new jobs is no recovery at all.  There is no point the Government blaming the snow for our lack of growth.  Even accounting for that our economy has flatlined in the past few months.  The Government has no plan for growth, only a plan for cuts – and for all those Doncaster firms that want to grow, it’s time for George Osborne to think again.”

Pat Knight, Labour’s candidate for Hatfield ward was born in Stainforth, the daughter of a miner, and  has lived in Hatfield ward for 33 years. A former library assistant and council officer, Pat is a keen fundraiser for cancer charities.

Rachel Hodson, Labour’s candidate for Thorne ward, grew up in Thorne.  Her grandparents live in Houps Road.  She went to West Road Primary, Moorends and has a degree from York University.  Rachel  works as the caseworker for Caroline Flint MP in Auckley.