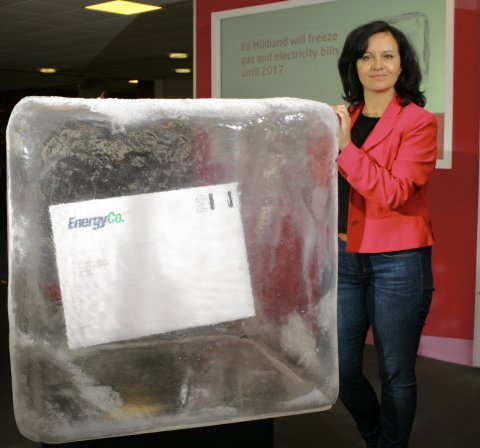 Caroline Flint is leading the campaign for fairer energy bills, calling for a 20 month price freeze and an overhaul of Britain's broken energy market.

"Consumers have seen prices rise by £300 since 2010 and the energy companies have made huge profits over that period." said Caroline, Labour Shadow Secretary of State for Energy and Climate Change.

"The energy market is not working for ordinary people or for many of Britain's 2.3million businesses.  David Cameron has refused time and time again to sort this out and people are paying the price for his failure.

Above right: Labour's pledge to freeze energy prices until January 2017

At Labour Party conference 2013, Ed Miliband and Caroline Flint set out plans to reform the energy market to reintroduce proper competition and create a system based on fairness and public trust.

The six biggest energy companies currently supply 98 per cent of homes and run 70 per cent of Britain’s power stations. A lack of competition means people can’t shop around to get a fair deal and so get overcharged.  And a lack of transparency with firms generating and selling electricity to themselves means that the Big 6 can get away with putting up bills when energy prices rise and not reducing them when they drop. When energy prices went up in 2008, bills went up. But when energy prices fell by 45 per cent in 2009, household bills only fell by 5 per cent.

Labour will reset the energy market by doing three things:
1.Getting energy companies to separate the parts of their businesses that generate energy from the parts that supply to the public with different licenses and separate operations.
2.Requiring all energy companies to trade their energy in an open market by selling into a pool; and
3.Introducing a simple new tariff structure so people can compare prices.

However, these measures will take time to kick in so a Labour Government in 2015 would take immediate action upon entering office to freeze prices until January 2017 when our reforms start kicking in. This could save the typical household £120 and the average business £1,800.  This would be achieved by introducing legislation immediately to give the Secretary of State the power to modify energy suppliers’ licences to require energy companies to freeze their prices.

SUPPORT LABOUR'S PETITION HERE. PRINT OFF THE PETITION AND GET FRIENDS TO SIGN