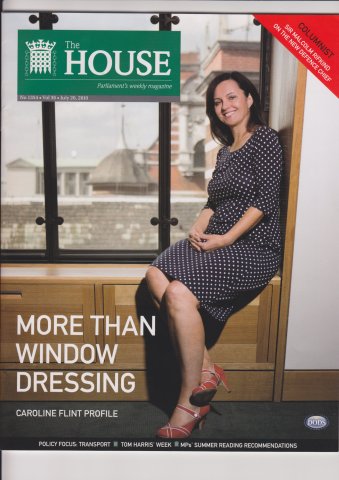 Official statistics produced by the House of Commons authorities show that Don Valley MP Caroline Flint is in the top 3% of backbench MPs for the amount of work she’s done in the Commons since the election.

Since May, Ms Flint has spoken 57 times in the Commons – making her the sixth most active Labour backbencher and putting her in the top 15 out of the 500 backbench MPs from all of the parties. Ms Flint has also tabled more than 110 questions since her re-election.  According to the independent website theyworkforyou.com, which monitors MPs and peers, the number of speeches in the Commons and the number of questions are both “well above average” compared to other MPs.

After her successful campaign led to the Coalition ditching their plans to give rape suspects anonymity, Flint is the first – and so far, only – MP to have persuaded the Coalition to abandon a policy in their Programme for Government.   Ms Flint recently announced her intention to stand for the Shadow Cabinet, which is due to be elected in October.

Said Don Valley Labour Party Chair, Pat Knight:  “The news that Caroline is one of parliament’s most active MPs should be no surprise to anyone.  She never stops.  Caroline has always been first and foremost a constituency MP and takes every opportunity to speak up on our behalf in parliament.  We are very proud to have Caroline as our Don Valley MP.”

Said Caroline:  “It has been a busy few months in Parliament since the election and from the first days of the Coalition I wanted to press them on important issues for Don Valley such as the treatment of Jarvis rail employees, the cancellation of the school buildings programme and the threat to local policing from the Government’s cuts.”

“It was a great honour to have been elected for the fourth time to serve Don Valley, including Thorne for the first time, and there has been no time to waste holding the ConDem Coalition to account and standing up for people in Don Valley.”

Ms Flint holds seven monthly surgeries across her constituency and has helped nearly 300 local people since the election.  “This is what keeps my feet on the ground,” said Caroline.

To read caroline's interview in the House magazine on 26 July go to
http://www.epolitix.com/house-magazine/housemag-article/newsarticle/more-than-window-dressing/