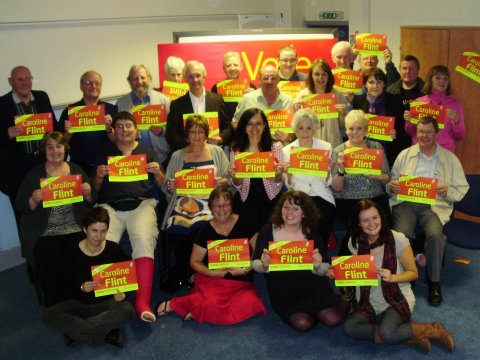 VOTE LABOUR: Caroline Flint and supporters get ready to get their message across.

Caroline Flint’s campaign in Don Valley was launched this week in sea of red and yellow.

Ms Flint told supporters “We have 24 days.  Tonight is the start, but we will hit the streets, the walks and the avenues speaking to everyone we can meet.

Ms Flint said:  Our teams of Labour volunteers have been hitting the streets for months.
We have been snowed on in Braithwell, chilled to the bone in Branton, made new friends in Thorne, and met devoted Labour supporters in Dunsville.

“Unlike my opponents, most of whom have only been candidates a matter of weeks, we actually have been meeting voters for months.

“Our message is that we have made a difference across Don Valley – new jobs, better policing, modern schools, new health centres, WarmFronts grants for pensioners.  And that’s not to mention the airport, the Interchange, or the NHS 8 til 8 centre in town.  You would have to walk around with your eyes closed not to see the change in our town.

“The last thing this area needs is to start going backwards now.”

Ms Flint followed the launch by handing in her nomination papers formally declaring her candidature.