Ahead of the Budget, Caroline Flint MP, Labour's Shadow Secretary of State for Energy and Climate Change, has highlighted that hundreds of jobs could be created in South Yorkshire if Government backs new energy companies.

Speaking after securing a special Commons debate on jobs and growth in a low-carbon economy, Caroline Flint MP, Labour's Shadow Secretary of State for Energy and Climate Change, said:
“Just looking around Doncaster and South Yorkshire we can see new companies doing solar and wind power; and huge potential investment in Carbon capture at local power stations.
“I want the Government to get behind these new industries and send out a clear message that they are vital to building new jobs in places like Doncaster.

"The race to build these new businesses is on and Britain is being left in the doldrums. We must get on board or risk missing out on growth, job creation and a revival of Britain's manufacturing sector. 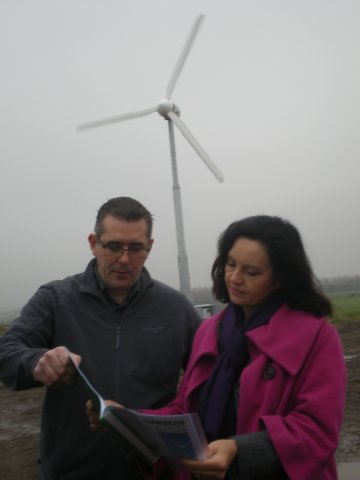 Doncaster firm, Harbon Wind Turbines, is the UK’s only manufacturer of medium sized wind turbines. Director, Dave Harbon said: “We know that wind turbines have a huge role to play providing energy for farms, businesses and the community.  The economy is facing a very tough time; and it is vital that the Government sends out a clear message that these industries are part of Britain’s future.  As an engineer I want “made in Britain” stamped on turbines in the future; not “made in China”.

Ms Flint told the Commons: "Nearly a million people already work in environmental industries in the UK. The transformation of our economy and a new energy industrial revolution are a huge opportunity for the UK, with the potential to create 400,000 jobs and support growth, when we need them more than ever. But as a direct result of this Government's mixed messages and failing policies, the UK has fallen out of the top ten countries in the world for investment in green growth, meaning that jobs, growth and industry that should be coming to this country are now going overseas.

"A new energy industrial revolution beckons - in the Budget the Government must embrace it and get behind British businesses without delay."