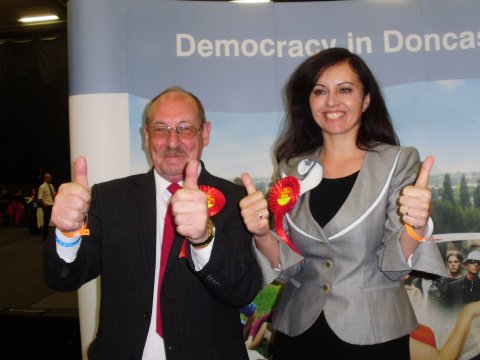 The electors of Don Valley have voted to return Caroline Flint as Member of Parliament in the General Election.

Caroline said:  "It is a great honour to have been elected for the fourth time to serve Don Valley and to represent Thorne, which come sinto the constituency, for the first time.

"I am grateful to everyone who took the time to vote in this election, and to the voters of Don Valley who rejected the Tories yet again and gave Labour their support.

"Once again, voters in Don Valley recognised the investment a Labour Government has put into local communities, in schools, the NHS and bringing new jobs.  And they voted for an MP who puts local people first and remains closely involved in the constituency.

"This has not been a four week campaign – our Labour Action Teams have been knocking on doors week in week out for most of the past year; and I am delighted that so many people welcomed seeing me on their doorstep; and in recent weeks outside their local school or in the high street.

My first surgeries, including my first in the Thorne ward, will begin on Friday 21 and Saturday 22 May.  My constituency office re-opens on Monday 17 May – please ring (01302) 623330 if you wish to make an appointment to see me or to invite me to meet your community organisation.

"I am proud to join my Doncaster colleagues in Parliament once more, albeit in changed political circumstances.  The country as a whole has given the Tories more votes and seats than Labour, but far from the outright victory that David Cameron expected.

"Whatever happens in the new hung Parliament, residents can be assured that I will not support programmes of cuts to essential services or tax hand-outs to the wealthy that I believe to be wrong for Britain and wrong for Don Valley."

Ms Flint, now elected for the fourth term, is the sixth MP to represent Don Valley since its creation in 1910.