Flint visits Land of the Tiger 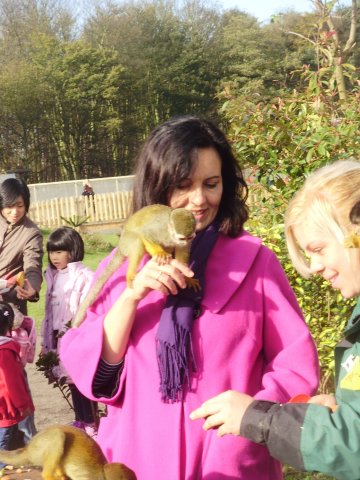 Caroline Flint took part on a tour of the latest improvements at the award-winning Yorkshire Wildlife Park this week.

Speaking about the success of the Yorkshire Wildlife Park, which is only opened in 2009, the Don valley MP said:

“The Yorkshire Wildlife Park has been transformed in just a few years into one of the best visitor attractions in the North of England.  I am not surprised that their innovative, entrepreneurial approach has been recognised by the British Chamber of Commerce.  This is yet another example of Yorkshire businesses setting a standard for the rest to follow.”

The MP visit included meeting the Squirrel Monkeys in the South America Viva; and meeting Vladimir, the Amur Tiger, one of the many endangered species kept at the park.  It is believed that less than 400 Amur Tigers are alive in the wild.

Ms Flint also saw the building of a huge enclosure for the arrival of Amur Leopards in Spring 2012.

The Yorkshire Wildlife Park has won Business of the Year of Yorkshire and the Humber in the British Chamber of Commerce Awards.  YWP will now go forward to the National finals.

YWP is also in the National Final for Large Visitor Attraction of the Year hosted by Visit England.

Plan your day out: www.yorkshirewildlifepark.net/