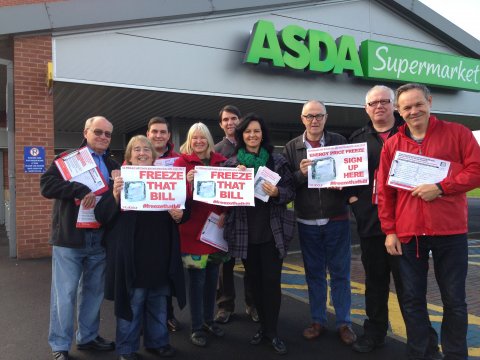 Energy Price Freeze campaigners were on the streets of Denaby Main, Conisbrough and Edlington this week, asking the Prime Minister to tackle soaring gas and electricity bills.

Said Cllr Sandra Holland: "There was a great response in Denaby Main, Conisbrough and Edlington today.  People are staggered at the brass neck of the energy companies ramping up their prices yet again, just as the cold nights are closing in."

Said Cllr Chris Mills: "We met people putting £20-30 a week into their prepayment meters, and disabled residents trying to reduce how long they charge their mobility scooters. People are disgusted at the size of these gas and electricity increases."

As local shoppers readily added their support to the petition, Caroline Flint said: "No one believes we are paying a fair price for our energy, and they are appalled that David Cameron refuses, time after time, to stand up to the energy companies.  Our message is clear unless David Cameron freezes prices, a Labour government will."

Said Cllr Phil Cole: “This week we’ve found that wholesale prices have risen by just 1.7% and last year their profits rose to as much as £95 per household.  Their case for these shocking price hikes has fallen apart.  The only protection they have is David Cameron, whose response looks more feeble by the day.”