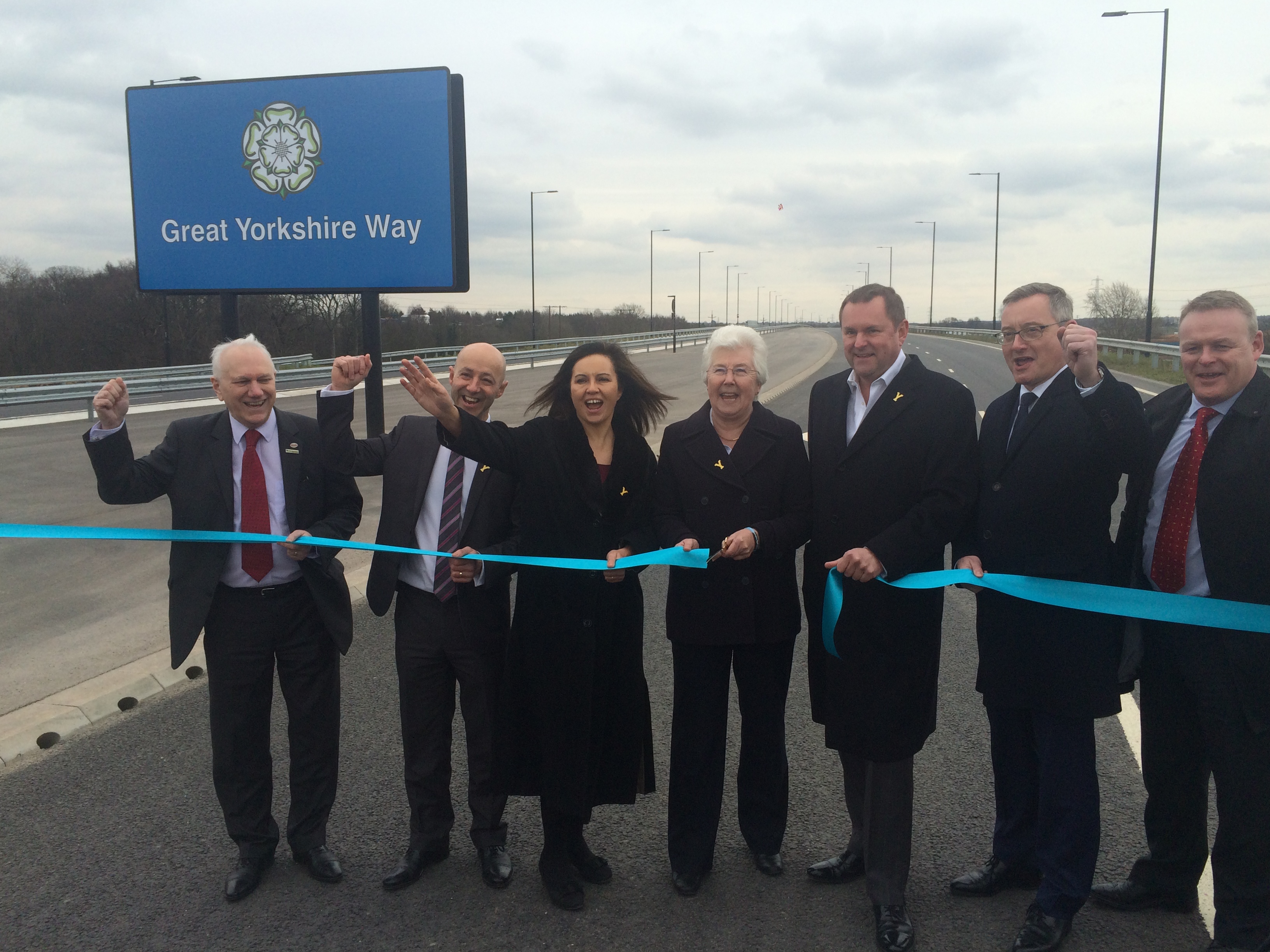 The Great Yorkshire Way, 3 miles of road linking the M18 to Robin Airport, via the iPort, was opened this week.

The event was kicked off with speeches from Don Valley MP Caroline Flint and Mayor Ros Jones.

Speaking after the launch, Caroline Flint said: “The idea for FARRRS began 18 years ago, but came to life when Robin Hood airport was given the green light. It seems strange that a few miles of road should be such a big deal.  But the key to Doncaster’s success is connectivity – easily getting from one place to the next.

“FARRRS enables thousands of Doncaster residents to reach jobs in Sheffield and Rotherham within half an hour.  And it brings 1 million more people within an hour of our airport and Wildlife Park.  FARRRS opens up development land, so the next generation of rail and logistics jobs will grow, half a billion pounds of investment here on our doorsteps.

“Doncaster is a gateway to the North and thanks to FARRRS, where people go, jobs and opportunities follow.  All of this, thanks to a few miles of road.  Not bad.”

Guests were taken in Wizz Air flight over the FARRRS site, to view the road from the air, before the ribbon was formally cut to open the road.

Planning for the link from the south of Doncaster to Junction 3 of the M18 started over a decade ago as part of the Finningley and Rossington Regeneration Route Scheme (FARRRS).  The first public consultation took place in 2004, under Mayor Martin Winter, a year before the airport opened. The consultation settled on the route that exists today.

Opening Great Yorkshire Way with the partners who help deliver the scheme, Mayor of Doncaster, Ros Jones, said: “This is a landmark occasion and the culmination of years of hard work to deliver one of the most important projects ever seen in Doncaster.

“Great Yorkshire Way is not only the gateway to the Sheffield City Region and Yorkshire it is the gateway to unprecedented levels of private sector investment which in turns sees thousands of new jobs and homes created. The local and regional economy is being transformed by this infrastructure scheme as many of the expected outcomes are already coming to fruition with the expansion of our fantastic Doncaster Sheffield Airport, the exciting iPort project really starting to take shape and brand new homes being built in Rossington.

“It’s an exemplary project and great advertisement for collaboration between the public and private sectors. Today is a great day for Doncaster and a day that benefits all of the Sheffield City Region and Yorkshire.”

The three mile long section has now opened and been named to acknowledge its prominence as a prime gateway into Yorkshire and to reflect its importance as a catalyst for transforming the regional economy.

Great Yorkshire Way is already facilitating significant new developments along its corridor including the first two high quality logistics units at the £400million iPort and the first of 1,200 new homes at Torne Park on the regenerated former Rossington Colliery site. It will also significantly reduce journey times to Yorkshire’s Robin Hood Airport Doncaster Sheffield, bringing an extra one million potential passengers to within a 60 minute drive.
Great Yorkshire Way is predicted to trigger £1.7billion of private sector investment creating 20,000 new jobs and 5,000 new homes. It is also expected to provide a three per cent boost to the Sheffield City Region’s economy.

“We have already begun to see impressive planned growth as a result of the new road with increased capacity from our incumbent airlines Thomson and Wizz and new airline Aer Lingus and Flybe seeing the potential of flying from the Sheffield City Region.

Peter Nears, Strategic Planning Director, The Peel Group said: “We are proud to have invested more than 160 million in the airport and the opening of the new link road is a tribute to a strong partnership with both the public and private sectors. It is also a symbol of Peel’s wider commitment to the Northern Powerhouse. This gateway to the Sheffield City Region project is truly transformational and the new road will be a huge draw to passengers, business and cargo bringing huge economic benefits to the region.”

Michael Hughes, CEO of Verdion, comments: “The opening of the Great Yorkshire Way is a key milestone: the final road link that seal’s iPort’s strategic position in Doncaster, one of the UK’s strongest logistic locations with excellent motorway links and close proximity to the Humber Ports. Seeing is believing, and now we can see the link road open, bringing the scheme that much closer to the Doncaster Sheffield Airport, and our first two speculative units being built, getting closer to completion. In addition, work has now started on the iPort Rail facility, the final piece of the intermodal picture.”

Work started in October 2013 and mountains were literally moved to complete the project. Six new bridges were built, including an impressive 12 metre high structure to carry the road over the East Coast Main Line with highway embankments built by re-using a million tonnes of material from the old colliery spoil heap.