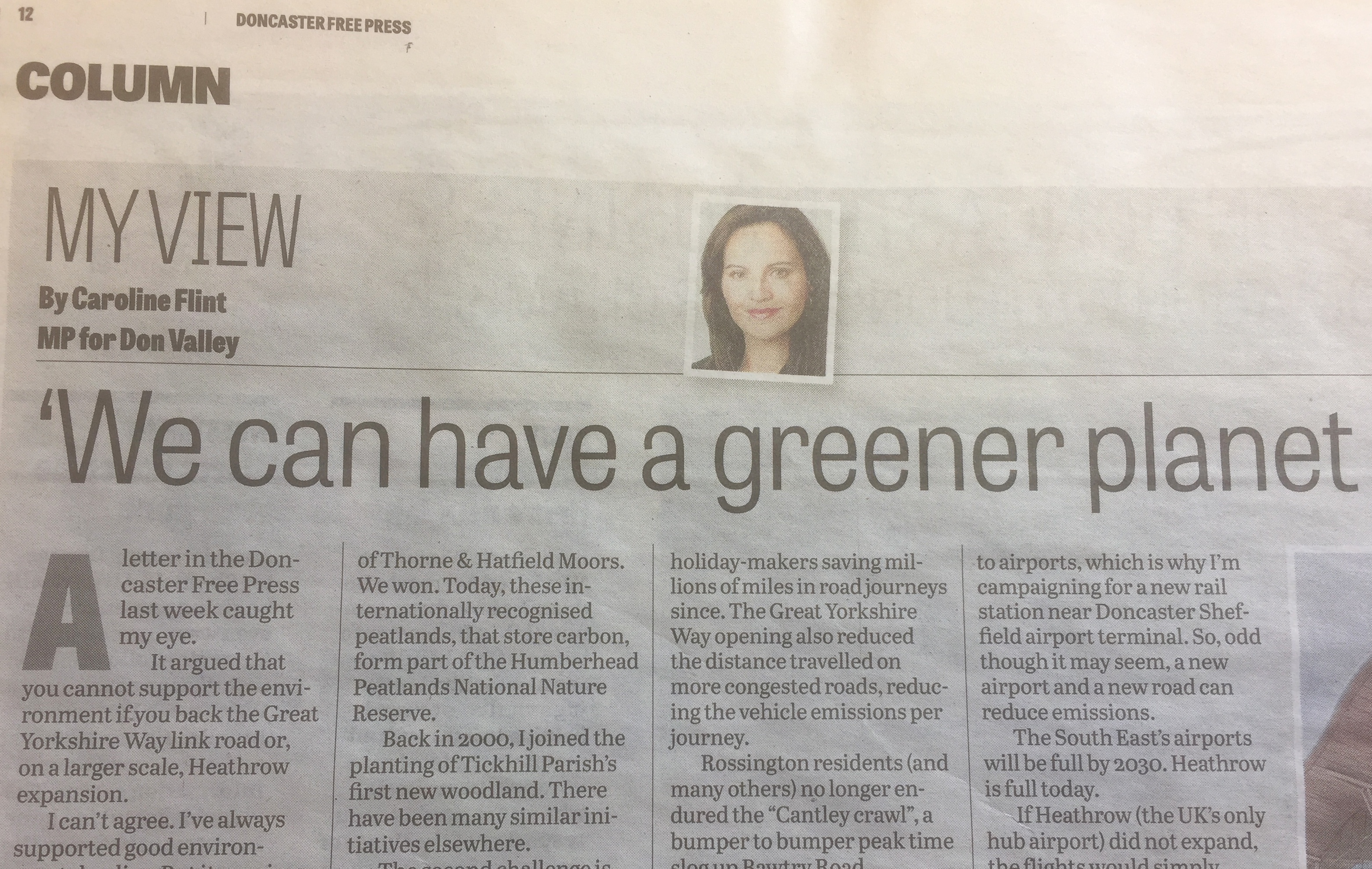 Read my article on the environment for the Doncaster Free Press below:

A letter in the Doncaster Free Press 26 July headed “Go for Green Way” caught my eye. It argued that you cannot support the environment if you back the Great Yorkshire Way link road or, on a larger scale, Heathrow expansion.

I backed the 2008 Climate Change Act, the world’s first. It set targets to reduce harmful emissions.  Long before, I had battled to halt the destruction of Thorne & Hatfield Moors.  We won.  Today, these internationally recognised peatlands, that store carbon, form part of the Humberhead Peatlands National Nature Reserve.  Back in 2000, I joined the planting of Tickhill Parish’s first new woodland. There have been many similar initiatives elsewhere.

The second challenge is to reduce emissions.  This doesn’t mean an end to all industrial activity or travel; but we have to challenge our businesses and ourselves to reduce emissions.  The biggest contributor to emissions is road transport.  Believe it or not, when we opened Robin Hood Airport (now Doncaster Sheffield) it reduced journey times for holiday-makers saving millions of miles in road journeys since.  The Great Yorkshire Way opening also reduced the distance travelled on more congested roads, reducing the vehicle emissions per journey.  Rossington residents (and many others) no longer endured the “Cantley crawl”, a bumper to bumper peak time slog up Bawtry Road. Traffic jams increase journey times and reduce engine efficiency, causing higher emissions.  So, around the airport, none of the air quality standards have been breached; yet Trafford Way, the congested road running past Doncaster station, has the worst air quality in the borough. But we need better access to airports, which is why I’m campaigning for a new rail station near Doncaster Sheffield airport terminal.  So, odd though it may seem, a new airport and a new road can reduce emissions.

The South East’s airports will be full by 2030. Heathrow is full today.  If Heathrow (the UK’s only hub airport) did not expand, the flights would simply move overseas.  Moving emissions elsewhere does not help tackle climate change.  Heathrow will have to meet demanding emissions targets; including improving access by public transport; and I hope we’ll soon see the first electric aircraft.

We can have a greener planet and greener air travel.

Caroline Flint is Member of Parliament for Don Valley