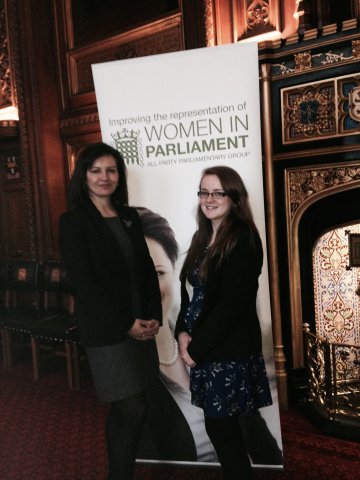 A Hayfield Sixth former and Girl Guide leader, Katie Wormald, is heading to Westminster today to Shadow local MP, Caroline Flint.  The visit is part of the “Inspiring Women” theme in support of International Women’s Day.

Don Valley MP, Caroline Flint, invited Katie to Shadow her on 6 March, after MPs were asked to “Inspire a young woman from your constituency”.  As part of Katie’s visit, she was given a tour of Ten Downing Street and was invited to a reception with Speaker John Bercow in the Speaker’s Apartments.

Said Caroline: “It was great to have Katie shadow me for the day.  I hope it gave her a brief insight into the world of Westminster and politics generally.”

Said Katie:  “It was really was a once in a lifetime opportunity to be invited by Caroline to come to Westminster, to sit in meetings with her and to see in the inside of Ten Downing Street.  The days was both memorable and inspiring.  I’d met Caroline before, when she has visited Rossington Brownies, so I was aware that what goes on in Westminster is only half of what an MP has to do.

“I think it is fantastic that MPs are trying to encourage more young women to consider a role in politics.

“It was also eye-opening to realise that, apart from women MPs like Caroline, there are thousands of staff who work in Parliament, as well as a huge research department at the House of Commons Library and tens of thousands of civil servants in Whitehall.  For any young woman interested in politics, there are many career paths on offer.”