Caroline Flint MP and Don Valley Labour Party celebrated their election win across Doncaster with a demand that David Cameron and Nick Clegg listen and change. 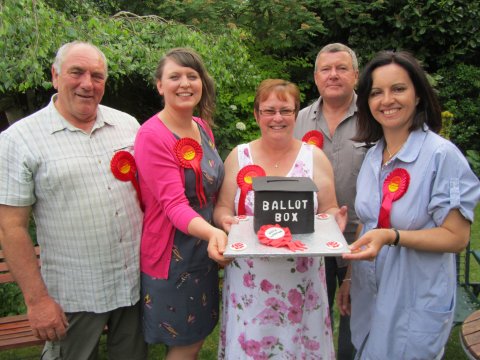 The call from Caroline Flint and newly elected councillors came after Labour won 17 of Doncaster’s 21 seats in Thursday’s election.
Said newly elected Hatfield Cllr Pat Knight: “The tremendous vote for Labour candidates was a clear message to the Government that the cuts are going too far, too fast and people don’t accept it.”

PICTURE: Election Victors Joe Blackham, Rachel Hodson, Pat Knight and Bob Johnson, with Caroline Flint, get to have their cake and eat it.

Said newly elected Thorne councillor, Rachel Hodson:  “Thursday’s election was a ringing endorsement of our campaign to stop the cuts to frontline policing that will hit Thorne and Doncaster hard.  The Government needs to hear loud and clear – stop the cuts to local policing.”
Said Bob Johnson, newly elected councillor for Edlington & Warmsworth:  “The message from voters in my ward was that they wanted councillors to stand up against these cuts.  The fact that in my ward and elsewhere, the Mayor’s English Democrats got a drubbing, should tell Mayor Davies that he needs to change course.” 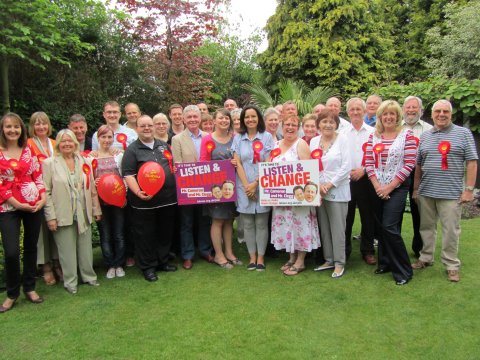 Said Don Valley MP Caroline Flint:  “South Yorkshire voters gave Nick Clegg a huge vote of no confidence.  The Conservative Party does not have a majority in Parliament and has only been able to govern because of the Liberal Democrats' top-up for a Tory-led Government.
"The public have told Nick Clegg what they think of his support for Tory policies and they are demanding real change. David Cameron and Nick Clegg must listen to the people.”
PICTURES SHOW:  “LISTEN AND CHANGE”: Labour campaigners with their message to the Government.