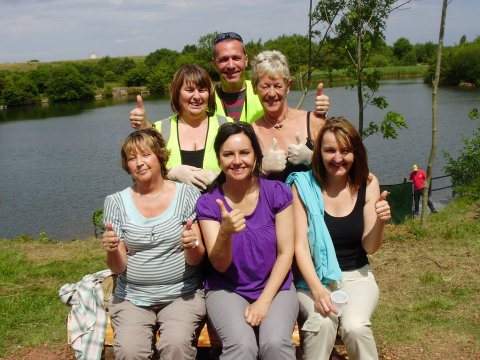 Caroline Flint and Labour volunteers will be helping out at the Martinwells Lake on Sunday 13 February from 9.00am-12.30pm.

Said Caroline:  “It has been great to join the Friends of Martinwells Lake since the project began.

“We have been inspired by the efforts of Maureen Tennyson, Margaret Adamson, and all the residents who have given their time and effort to open up the paths, fishing pegs, and picnic areas to transform the old brick pond into a lake for all the family to enjoy.”

Said Caroline: “I promised over a year ago that I would put time into volunteer activity in the coming year, and this is the project that I, Cllr Elsie Butler and other Labour volunteers decided to focus on to make a difference.”

This the first session of activity since the Friends of Martinwells Lake were given commendations from Doncaster MBC, sponsored by the ward councillors, for their contribution to the community.

Said Cllr Elsie Butler:  “I don’t need to hear from the Prime Minister about his Big Society. This project is a good example of a decent society, just like the restoration of St Peter’s Church, Old Edlington and the redecoration of International City Church hall which runs youth activities.  Community volunteering happened long before David Cameron discovered it, and it will carry on long after he’s gone.”

If you want to help the Martinwells Lake project, ring Doncaster’s Neighbourhood Team on 736410.