Labour has won the argument on energy bills - My Guardian article 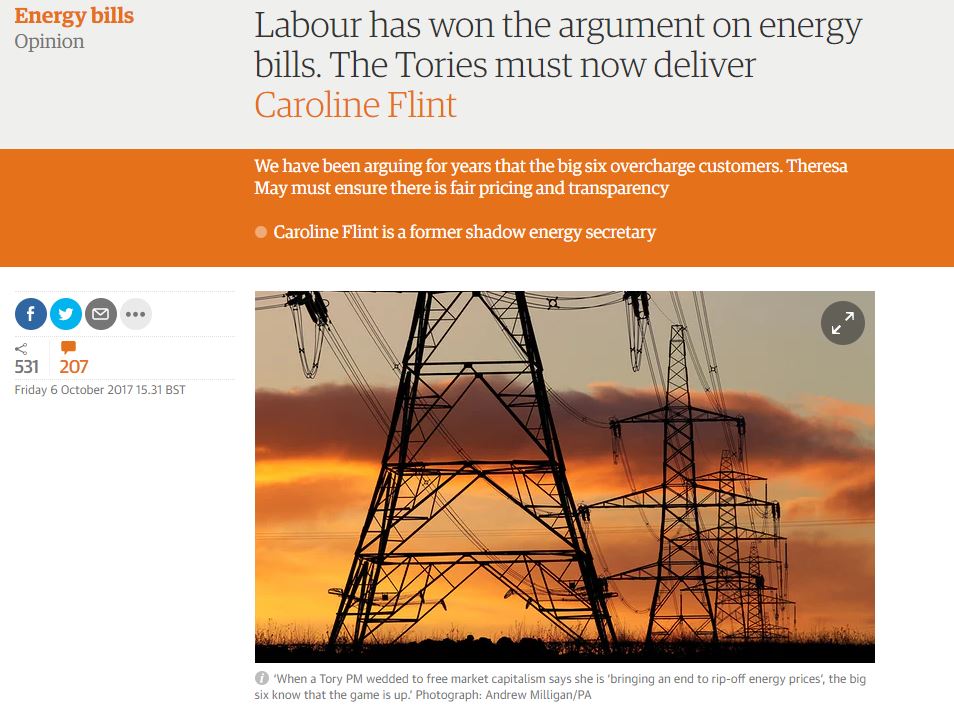 Labour has won the argument on energy bills. Now the Tories must deliver.

Theresa May’s defence of free market capitalism didn’t begin well. The headline from that speech – aside from the various calamities – was a price cap imposed on a failing energy market.

As far back as 2011, I argued that the public was being ripped off by the energy giants. The government back-pedalled, holding an energy summit at No 10, urging people to switch, tinkering with green subsidies, always resisting market intervention. Finally, in 2014, David Cameron commissioned a Competition and Markets Authority inquiry into the energy market, kicking the issue beyond the 2015 general election.

The CMA concluded that the big six energy companies had been overcharging customers by an average of £1.4bn a year since 2012, rising to £2bn a year by 2015. It was a disaster for the companies controlling 85% of the energy market.

No one is arguing for permanent price controls. But this market needs reform

The CMA urged a safeguard tariff for the 4m households using prepayment meters, who pay in advance, usually at higher tariff rates. One CMA panel member urged a price cap for all on the highest default tariffs, standard variable tariffs (SVTs).

The Tories’ 2017 manifesto noted that customers “mistakenly assumed their loyalty was rewarded”, and those who did not switch “are punished for inactivity with higher prices”. It pledged a review.

Perhaps in an attempt to shore up her ailing premiership, May announced the price cap. The big six didn’t wait long before attacking the proposal. Iain Conn, CEO of Centrica (parent company of British Gas), said: “Price regulation will result in reduced competition and choice … This will negatively impact consumers.” Price controls fail, he told Radio 4’s Today programme, citing international examples. Once again, the big six defend the indefensible.

No mention that “competition and choice” had clearly failed the poorest customers – those using prepayment meters. In April, Ofgem introduced a safeguard tariff for those 4 million customers; average savings are around £100 per year.

What about the rest? A KPMG report in June noted that only 1% of customers each month switch to a new provider. Ofgem says about 3m households did so in the past year. Citizens Advice noted that just 27% of households shop around for better deals, switching in the last three years – that’s the “active energy market”.

More than two-thirds of customers (the passive energy market), never switch and languish on the expensive SVTs. KPMG noted that each of the big six have a majority of their customers on these tariffs.

The financial website This is Money reported in March that the gap between SVTs and the cheapest tariff had risen to £262 per annum.

Eighty per cent of elderly customers, disabled customers, and poorest customers are on these tariffs. The least internet-savvy, the least engaged customers. Social justice demands that these customers get fair energy prices.

And what about the international evidence on price caps? The European commission has noted that 24 years after the formation of the European single market, the EU still does not have a fully functioning single market in energy. It noted: “Prices for households remain regulated to different degrees in about half of the member states, which may constitute an obstacle to demand-side participation and retail competition.”

The KPMG report cites the case of Belgium. Between 2012 and 2014, it introduced an upper limit on energy prices for customers on variable tariffs. This “reduced bills by €17 to €52 for electricity and €42 to €82 per annum for gas”. During this period, “customers’ confidence in the market improved by around 7% – the highest in the EU”.

No one is arguing for permanent price controls. But this market needs reform. Fair pricing and transparency must be restored to rebuild trust. On 21 September, Michael Lewis, CEO of E.on UK confirmed that E.on is scrapping its SVT, moving customers to fixed-term deals.

When a Tory PM wedded to free market capitalism tells a Conservative conference that she is “bringing an end to rip-off energy prices once and for all”, the big six know that the game is up.

Labour has won this argument. Change is on the way, and millions of consumers will benefit from an effective price cap. This is just the beginning. Now let’s see the details.

This article was first published by the Guardian.com on 6 October 2017