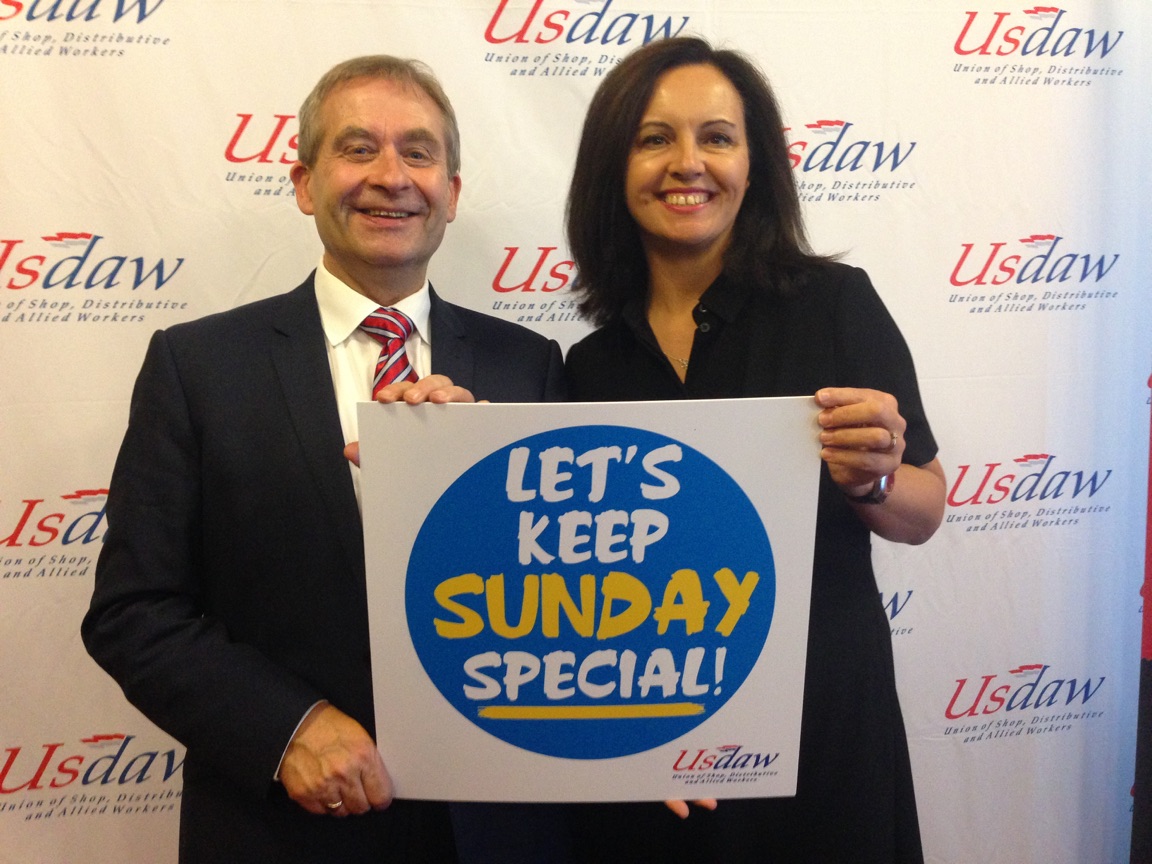 Caroline Flint has welcomed a lobby of Parliament by Usdaw members to oppose the Government’s proposal to devolve Sunday trading regulations.

The Don Valley MP met Usdaw members, who work in retail, to hear how extended opening in large stores will lead to even more retail staff being pressured to work longer hours on Sundays.

Said Caroline: “When I hear from USDAW members who work in our high streets and retail parks, I understand why over 90% of shopworkers oppose any extension to Sunday trading hours.

“The Sunday Trading Act is a great British compromise, which has worked well for over 20 years and gives everyone a little bit of what they want. Retailers can trade, customers can shop, staff can work; whilst Sunday remains a special day, different to other days, and shopworkers can spend some time with their family.

“I am convinced that shops are currently open long enough for people to do their shopping and that Sunday should remain a special day, different from any other. I oppose devolving Sunday trading because it will lead to longer opening hours.

“Extending Sunday trading does not mean customers have more money to spend, it would not create jobs and is likely to lead to the closure of smaller stores. So this is not a way to boost the local economy or help town centres. It would be detrimental to shopworkers and their families, as well as wider society, so I am pleased to be supporting Usdaw’s campaign.”

Said John Hannett, Usdaw General Secretary: “Usdaw and our members are delighted to have the support of Caroline Flint MP and many others who value the special nature of Sunday and want to protect it.  There is no great desire from shopworkers, customers, retailers or local authorities for these changes and many oppose them. We fear that devolution of Sunday trading is a solution looking for a problem.

“It is not yet clear whether the Government will seek to introduce legislation, but if they do I hope that they will abide by their promise of a proper consultation and a full parliamentary process. That would mean publication of the consultation responses and a considered reply from the Government, demonstrating that they have listened, before the introduction of any legislation to change Sunday trading.”

Usdaw (Union of Shop, Distributive and Allied Workers) is the UK's fourth biggest and the fastest growing trade union with nearly 440,000 members. Membership has increased by more than 17% in the last five years and by nearly a third in the last decade. Most Usdaw members work in the retail sector, but the Union also has many members in transport, distribution, food manufacturing, chemicals and other trades.