Made in Doncaster - article by Caroline Flint 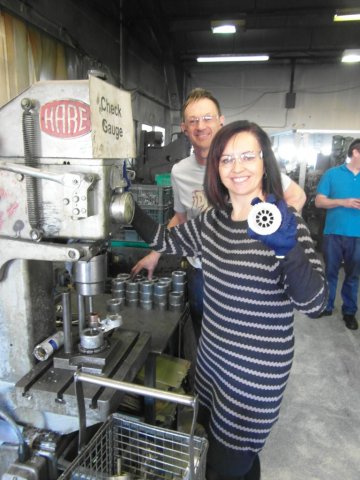 We’ve all heard of Sheffield Steel, a brand mark of quality known the world over.  I’m determined that here in Doncaster we celebrate the firms and the people who sell products that we can say are “Made in Doncaster”.

I love seeing how people make things, like Gary at W Hallam Castings in Thorne, who produced rotars for motors using a hydraulic press; or Jackie and Liz who were experts at “whittling”, showing me how to smooth and finish aluminium vents.

Or the staff at Omega plc who demonstrated their £1million laser-guided painting unit to coat kitchen doors; or workers at New Era who make high quality fish food, which they sell all over the world, at the last count to 23 countries.  It took the arrival of London 2012 for many people to realise that Bridon Ropes not only help to build the Olympic Stadium, but export ropes across the globe.

A few years ago, I brought together some firms that wanted to export to Eastern Europe, in particular Croatia and Slovenia.  Last year, Rosie Winterton and I supported a seminar for Doncaster businesses who wanted to export, and I met Linda and Tomas Torstensson from Kozikidz, based in Tickhill but selling to 32 countries, and now have two stores in China!

I believe its time we shouted about the great things we make here in Doncaster.  We should be proud that soon, with the building of the IPort, near Rossington, we will find it even easier to ship goods all over the world, by air, by road, rail or via the Humber Ports.

Which brings me to who makes what we sell.  The first week of March was National Apprenticeship Week, and we Doncaster MPs want the Government to do more to promote apprenticeships.  I’ve met some great apprentices recently: at Polypipe in Edlington, at W Hallam Castings, and last week at Asda in Rossington, which has three trainees.  But the prize goes to a Conisbrough apprentice I met at Alstom in Stafford.  Yes, Stafford!  Kurt Rodgers commutes from Conisbrough each week to wherever his company needs him. During Kurt’s apprenticeship he has become a UK welding champion. Next year, he competes at a World Skills Olympics in Brazil.  Kurt’s experience shows that by sticking at it, and learning a real skill, he improves his prospects for years to come.  Apprenticeships are a good option for young people in our borough.  Over 3600 Doncaster young people started apprenticeships last year.  The latest research shows they added some £7.3million to their firms.

This article was published in the Doncaster Free Press and South Yorklshire Times on 21 March 2014.