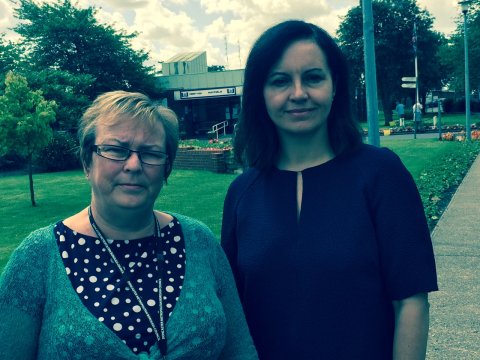 In a two hour meeting, Ms Flint and Cllr Knight expressed residents’ concerns over safety and discussed what action the prison was taking.

The meeting took place on the day that Darrell Roy Burbeary, serving a sentence for burglary, was recaptured by police after absconding in June.

Said Caroline: “It was clear that the Governor, Chris Dyer, took the residents’ concerns very seriously and was looking at every action he and his staff could take to reduce absconding.  He recognised that the numbers absconding were too high.  The numbers choosing to walk away, despite facing a heavier sentence when they are caught, is not acceptable.  We were reassured today that all inmates are risked assessed while at Hatfield, and those whose risk of flight increases, for example, because of problems at home, are returned to a closed prison.

“Where prisoners are being recommended as safe to transfer from a secure prison an open establishment like Hatfield, it is vital that only suitable prisoners are accepted.  I want HMP/YOI Hatfield to have all the information and time they require to  make the necessary checks on each new arrival.  That is one of the issues I will be raising with the Minister.”

Said Cllr Pat Knight:  “We were very keen to impress upon the governor how worrying it is for the community to have inmates escaping.  Many of the staff and prison officers live locally, so they hear those concerns from their neighbours and friends.”

Said Ms Flint: “We recognise that open prisons, like HMP/YOI Hatfield, are different from closed, secure prisons in that the inmates are often serving the final months of their prison sentence; many are being prepared for life after prison, and work in the community every day.  We don’t want that to end.  Over half of these prisoners will go into work after leaving prison and 98% will go into settled accommodation.  So the work of places like HMP/YOUI Hatfield is important and must continue.”

The Don Valley MP has met with the Prisons Minister, Jeremy Wright, on two occasions to discuss the situation.  The MP and Cllr Knight will be visiting the prison again in the autumn.