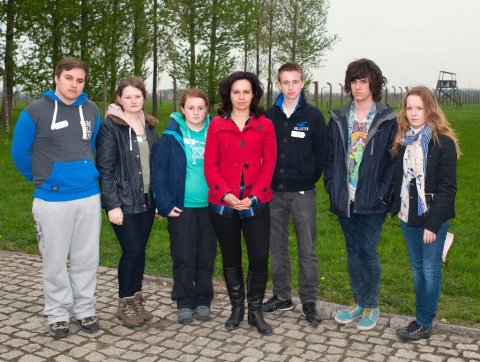 On 1 May, Caroline Flint accompanied students from Don Valley as part of the Holocaust Educational Trust visit to the Nazi concentration and death camp Auschwitz-Birkenau.

The Doncaster group were joined by more than 200 post-16 students from across Yorkshire and Humberside for the one-day visit.

Said Caroline: “This has been a unique opportunity to learn what happened at Auschwitz-Birkenau, to pay respect to those murdered by the Nazis, and to explore the lessons of the Holocaust and its relevance for today.

"This was state-organised genocide on an industrial scale - one of the darkest episodes in human history. I hope the students will now use the experience to commemorate and educate others about the Holocaust within their schools and our local communities.”

Now in its fourteenth year, the Government funded project is based on the premise that “hearing is not like seeing”.

The group visited the Polish town of Oświęcim, (Auschwitz is the German version of the name) the town where the Nazi concentration and death camp was located and where, before the war, 58% of the population was Jewish. Students then visited Auschwitz I to see the former camp’s barracks and crematoria and witnessed the piles of belongings that

were seized by the Nazis. Finally they spent time at the main killing centre of Birkenau before ending the  day with a candle lighting and a period of reflection.

6 million Jews were killed in the Holocaust and there were many other victims of Nazi persecution. Government funding has enabled the Trust to facilitate regional visits to Auschwitz, as part of its Lessons from Auschwitz Project for thousands of students each year.

Among the Doncaster students, Caroline Flint was pleased to join two students from each of The McAuley Catholic High School, The Sir Thomas Wharton Community College and Hayfield School in her constituency.