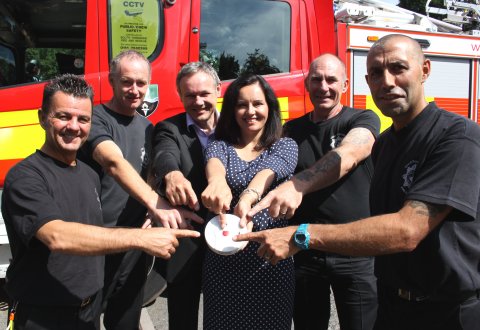 Don Valley MP Caroline Flint has backed a Bill this week to require landlords to have smoke alarms in rented properties.

The Bill has been introduced just months after the tragic death of two year old Libby-Jayne Hornsby in a house fire in Conisbrough.  The rented house did not have smoke alarms.

Said Caroline:  “The tragic accident that took away Libby-Jayne Hornsby is not an isolated incident.  Years after smoke alarms have become commonplace, one in five privately rented homes still does not have a smoke alarm.

“The evidence is clear that smoke alarms save lives.  A smoke detector raises the alarm more quickly and most fires are discovered in less than 5 minutes.  This obviously reduces loss of life.

“Not only do smoke alarms save lives, but they can be bought for as little as £5.  There is no excuse for landlords not to put them in every property.

“The Government gave itself the power to require smoke alarms in privately rented homes in the Energy Act 2013 but has failed to act.
With 9 million people now renting privately including over 1.3 million families with children, I am determined to ensure that private rented homes are safer and more secure; and if this Government doesn’t act in response to Nick Raynsford’s Bill, I know that Ed Miliband will in 2015.”

Ms Flint said the Smoke Alarms Bill is just the start of a campaign to make private rented homes safer.  “It is difficult for a Bill introduced by one MP to make it into law, but I hope the Government will listen to the plea made in the Commons, and use their powers to ensure tenants have homes protected by smoke detectors.”

Among the Bill’s supporters is the Chief Fire Officers Association.  The Bill was given a First Reading by the Commons by 245 – 8 votes.