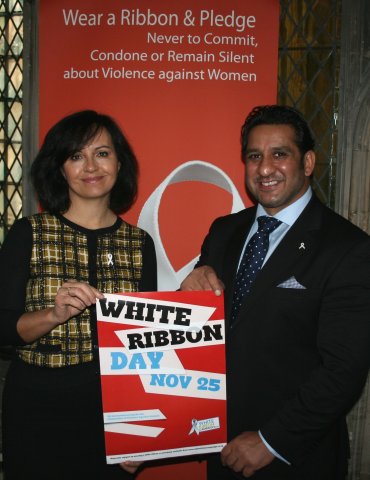 “It is great to see Ikram Butt supporting this vital campaign.  November 25th is a special day to remind men to take more responsibility for reducing violence against women.  Violence against women should not be tolerated.  We can’t close our eyes to it or pretend it doesn’t happen.  Men have a huge part to play in campaigning to stop violence against women, for only then will we make our society safer for over half the population.”

Ikram Butt, the only Muslim to have represented England at Rugby League, is one of White Ribbon campaign's busiest ambassadors. He played for Leeds and Featherstone Rovers, before working for Connecting Communities. In his autobiography ‘Tries and Prejudice’ he talks of the vital need to bring communities together. He works at Parkinson Lane Primary School, and is the Manager of the British Asian rugby Association. In November he played for the Great Britain Masters team v The Army. As an example for young people, Pakistan Rugby now play with a white ribbon at the top of their sponsors logos in their kit. Ikram is also active in the Parliamentary rugby team.

White Ribbon is a global campaign to ensure men take more responsibility for reducing the level of violence against women. White Ribbon Day is on 25 November, a day which is also recognised as the United Nations' International Day for the Elimination of Violence against Women. For more information about the campaign, please go to http://www.whiteribboncampaign.co.uk.