MP gets down to fractions with at Morley Place 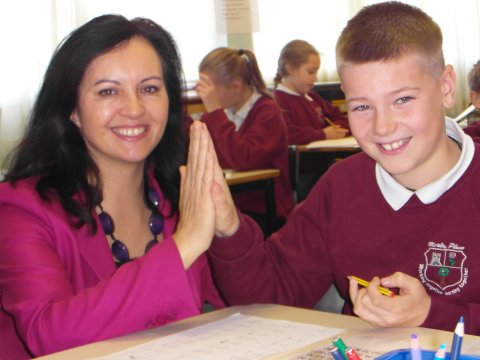 Caroline Flint’s visit to Morley Place Junior School, Conisbrough put the local MP to the test for over two hours.  After facing dozens of questions at the school assembly, Ms Flint spent time in each classroom.

Said Caroline: “Morley Place was a joy to visit.  The pupils were very smartly  turned and incredibly patient during assembly.  The pupils were full of questions, it was Like Question Time all over again. And in their classes they seemed really engaged and interested in their work.  Sitting down with pupils to do fractions and other maths certainly got the cogs turning.”

“When I got to sit down with a smaller group of pupils I found they were really interested in issues like how fast cars travel past their school.”

Said headteacher, Alan Littlehales:  “The pupils absolutely loved Caroline coming to school.  Some of the pupils had heard about Caroline and they did research before she visited.  They were quite excited to have a real personality in their school.  As a result they were full of questions.

“The pupils were also extremely interested in the issue of the speed limit and were full of questions about the issue.  Caroline gave them a lot to think about and they responded brilliantly.”