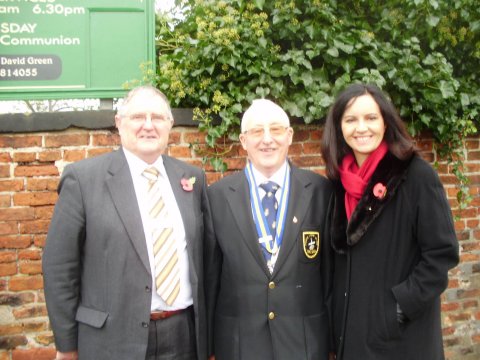 Said Caroline:  “I was very grateful to the Thorne and District Branch of the British Legion for inviting me to their Remembrance Service.  The wreath laying, the parade and the church service were all very well attended and I was pleased to go to the Sea Cadets hall afterwards to meet local veterans.”

The Thorne & District Branch has already raised £14,000 during this year’s Poppy Appeal, and some funds are yet to be collected.  Ms Flint, who pays for her own wreath, always orders her wreath from the British Legion.

Ms Flint said she was saddened by the complaints of Thorne Mayor, Tony Brookes about her wreath.

“The British Legion Chairman, Lawrence Millsom, very kindly ordered the wreath and when I noticed it had a Labour logo I did not want to embarrass him a few minutes before the wreath laying began.  I explained this to Tony Brookes and advised him that we would replace the logo after the ceremony, which we did.  No one else raised any concern at all.

“Remembrance Sunday is not an occasion for political differences, it is when we all come together to pay respects to those who have given their lives.” 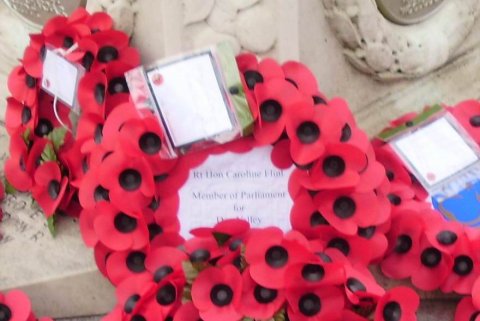 At the end of the wreath laying ceremony, Ms Flint’s assistant replaced the symbol with a House of Commons logo and inscription on her wreath. (See right)

Lawrence Millsom, Chairman of the Thorne & District British Legion Branch said:  “We were highly delighted that Caroline could join us for Remembrance Sunday and we asked the MP to lay the first wreath, because in our eyes she represents the Queen.

“I ordered the wreath for Caroline Flint and I asked for a Labour symbol to be put on it.  I believe the real upset is that the Mayor was asked to lay his wreath second, after the MP, and they didn’t like it.  It is very sad because everybody was there to remember the fallen.”

he has the greatest respect for the British Legion and is joining the Thorne & District Branch for its Christmas lunch in December.