Caroline Flint MP was given a sneak preview of Doncaster’s newest health centre this week, the Stone Castle Centre, Conisbrough. 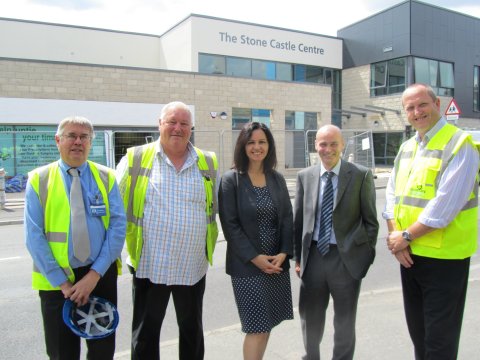 The £6million health centre, commissioned and started by the Labour Government, opens on 20 July.

Said Caroline:  “Morgan Sindall have delivered a splendid health centre for local people.  Anyone who remembers the old GP practices on Gardens Lane will see a world of difference.  This new centre is going to be better for patients and better for the health professionals who work here.”

Chris Stainforth, NHS Doncaster’s Chief Operating Officer, said: “I am delighted with the Stone Castle Centre, a lot of thought has gone into the design and local communities have benefited from the employment and business opportunities it has generated. The building is of a very high standard and so will be the health care that local people receive there.”

The Stone Castle Centre is one of the last

two health centres approved and underway before the Tory-led

Said Caroline: “The centre includes space, not just for the GP practices, but for out-patient sessions, podiatry and minor operations, so that people do not have to go to hospital for minor surgery.  A lot of the new generation of GPs want to do minor surgery and this centre enables more NHS services to be brought into the community.” 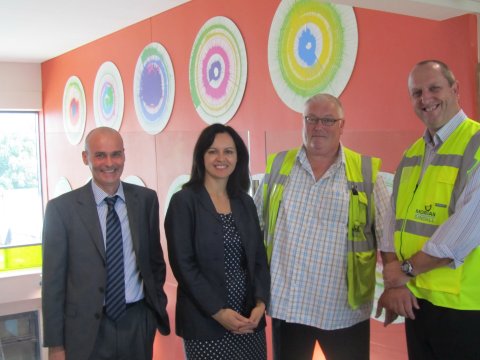 The Stone Castle Centre is one of the last two health centres approved and underway before the new Coalition government cancelled other health centres as part of their first budget cuts.  The centre has employed 500 people to build it, including 16 apprentices and a guaranteed quota of local labour.

The centre also has high environmental standards.  Its gas boiler generates electricity, the centre has a natural sedum roof, recycles all its rain water to flush the w.c.s and uses 100 tonnes of recycled ground glass under its paving.  The wooden south-facing wall even has bat boxes.
The centre is due to open on 20 July.  The Weldricks pharmacy opens on 18 July.  ENDS