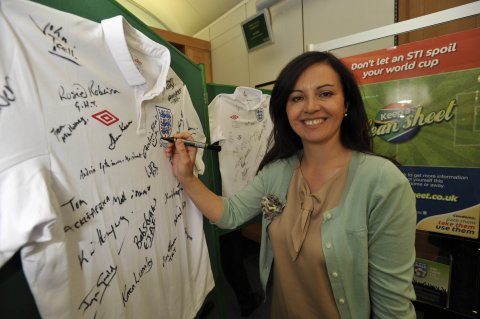 Caroline Flint today urged constituents travelling to South Africa for the World Cup not to expose themselves to HIV, whatever the score.

Ms Flint, a former public health minister, warned that South Africa has one of the highest rates of HIV in the world, with roughly one in five adults infected. HIV is transmitted through unprotected sex and there are concerns that fans, high on beer and atmosphere, may take risks they could regret.

Speaking at an event in Parliament to highlight the importance of staying safe, Caroline Flint MP said: “I wish anyone from Don Valley who is travelling to South Africa a fantastic time. It’s an amazing country and it will be the trip of a lifetime. But I urge them not to take risks with their health, because there is no cure for HIV.”

HIV is not spread through casual contact, such as shaking hands or sharing food, so most visitors will have no cause for concern.

Today’s event marked the launch of a website www.keepacleansheet.co.uk designed especially to inform fans about HIV and other sexually transmitted infections during the World Cup. The initiative was the brain-child of a cross party group of MPs, HIVsport and Durex, and has the support of the Foreign Office and the Terrence Higgins Trust.

The Foreign Office is working closely with South Africa to ensure that all travelling fans can enjoy their time in the country and stay as safe as possible.

Director of HIVsport, Stephen Bitti advises fans at home and abroad to “have fun, stay safe, and make sure STIs are not part of your World Cup experience.”

Fans at home could also be at risk. Recent research for the sexual health charity Terrence Higgins Trust found that nearly one in ten 18-34 year-olds in the UK drink so much while watching sporting events, in person or on TV, that they can’t remember what they did afterwards.