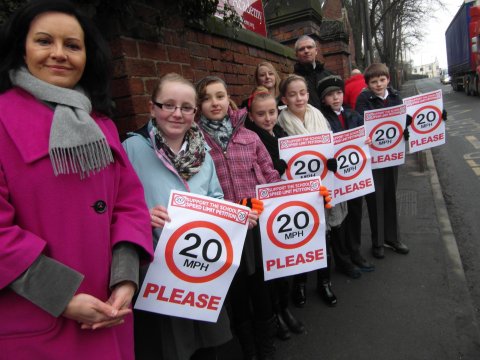 Don Valley MP, Caroline Flint visited Castle Academy this week to support their bid for a lower speed limit near their school.

Ms Flint was joined by pupils keen to get their message across.

Simon Martin, Head teacher of Castle Academy, Conisbrough said:  “I conducted a survey of parents and the results were that 92% of parents welcomed Caroline Flint’s proposals to reduce the speed limit near schools.  For several years we have expressed concerns, especially about the main Mexborough-Doncaster Road, without success.”

Said Caroline Flint:  “Over 30 schools have already contacted me in support of the campaign to reduce speed limits near schools.  Castle Academy is a great example of a school adjacent to Doncaster Road where cars are on a stretch which changes from 30-40mph, within a short distance of the school.  I believe road safety should come first.”

“Of course we need to educate drivers and pupils about road safety, and of course, the crossing patrols are valued, but if we are going to change the road safety culture then we can start by making drivers think “SCHOOL AHEAD. 20’S PLENTY”

Ms Flint criticised Mayor Davies lack of response.  “It great to talk to Headteacher Simon Martin, Deputy Head, Jeni Mead and some of the year 6 pupils.  Castle Academy is on a road where the speed limit moves from 30 to 40mph and huge HGVs hurtle along each morning.  The pavement is very narrow.  I don’t envy anyone crossing the road, or the difficult job of crossing attendant.

“The Mayor knows that 20mph limits are not expensive.  It does not have to cost tens of thousands of pounds to erect signs, and the Council currently spends thousands each year telling the public not to drop litter.  Money like that could be used to educate drivers about 20mph limits near schools.”

Castle Academy has entrances on Station Road (30mph) and Low Road is 30mph moving to 40mph at the edge of the school site, near the Station Hotel.  The School has its playing field on the opposite side of Low Road, which is a busy road.