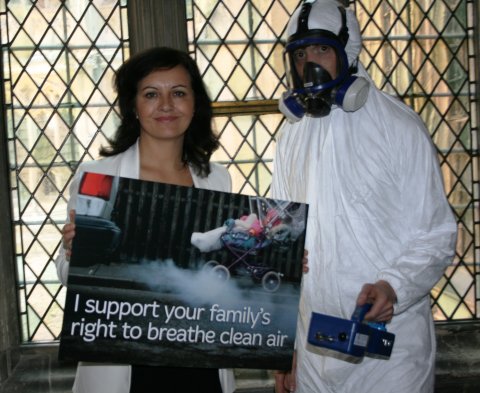 With the summer heat leading to dangerous levels of air pollution around the country, Don Valley MP Caroline Flint is supporting your family’s right to breathe clean air.  Ms Flint has slammed a government proposal to scrap air quality monitoring by local councils.

Said Caroline:  “Air pollution causes 29,000 early deaths each year in the UK.  Yet Ministers want to stop anyone knowing how bad the pollution is, and remove the duty on councils to assess and report the data.”

The Don Valley MP supported measures for Doncaster to measure air quality when Robin Hood Airport opened in 2005.  “The airport responsibly agreed that air quality should be monitored, just as happens across the borough.  Does anyone actually think it can be good for the facts about air quality to be hidden away or worse, never measured at all?  The Government needs to think again.”

The UK suffers from illegal levels of air pollution – in 2010, 40 out of 43 zones failed to meet legal limits for nitrogen dioxide. 16 cities and regions will not meet these limits until 2020 or in the case of London, 2025 [List of affected cities below].

The Government has launched a consultation to stop monitoring air quality – meaning there will be no local data about the health risk of air pollution. The consultation proposes to remove the requirement for local authorities to report or declare local air quality figures.

“Caroline Flint is doing the right thing by stepping in to protect the health of local people. Air pollution is an invisible killer, causing heart attacks, strokes, and respiratory disease. Children living near busy roads have been shown to grow up with underdeveloped lungs, and that’s not acceptable.“

"The Government has been caught red-handed trying to hide the facts about air pollution.  It wants to reduce local monitoring and reporting of air pollution and has still not published estimates of deaths attributable to air pollution for every local authority in England.”

•    Pollution from road traffic, and particularly diesel fumes, is the most significant cause of poor air quality. The two pollutants of most concern are microscopic airborne particles, known as ‘PM10’,  and nitrogen dioxide.

•    An air pollution episode is defined as moderate or above on the air quality index. Current smog (ozone) episode is detailed on London Air Quality Network; http://www.londonair.org.uk/london/asp/publicepisodes.asp?region=0
or on Defra Air – http://uk-air.defra.gov.uk/  NB current smog episode relates to southern England only.

•    Nitrogen Dioxide (NO2) is a gas caused by road traffic and other combustion processes. NO2 is harmful to health and associated with early death, hospital admissions and respiratory symptoms. (See P23, point 3)

•    ClientEarth leads the Healthy Air Campaign which is supported by growing coalition of NGOs including the British Heart Foundation, Asthma UK, Clean Air in London, the Campaign for Better Transport, the Chartered Institute of Environmental Health, Environmental Protection UK, Friends of the Earth, Living Streets, Sustrans, Age UK London, London Sustainability Exchange and the Chartered Institute of Water and Environmental Management. It is advised by Professor Frank Kelly at Kings College London.