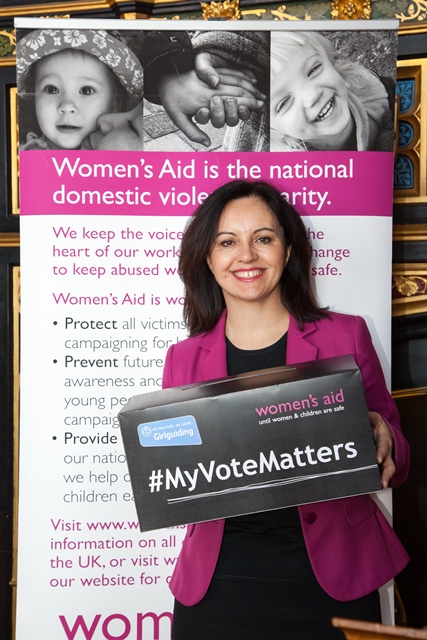 Don Valley MP, Caroline Flint, has pledged to support two of the UK’s leading women’s charities in their call for all women to use their ‘vital’ vote in this year’s General Election. Caroline has pledged to listen to women, especially survivors of violence against women and girls in Don Valley when campaigning and in Parliament.

Said Caroline: “Girlguiding and Women’s Aid together represent and support nearly one million girls and women across the UK.  They want to ensure all women’s voices are heard at the ballot box on 7 May.  More than 10,000 girls in guiding will be first-time voters in May.  Their votes are vital in this election.”

Caroline has signed the Women’s Aid pledge to Hear Her, See Her, Believe Her¸and is supporting Girlguiding’s Girls Matter campaign.

Caroline said: “The experiences of women and girls must be heard, locally and nationally.  No party can make good political decisions and shape good policies without taking women and girls into account. I am pleased to support Women’s Aid and Girlguiding in urging all the women in my constituency to vote, and pledge to take their concerns and experiences into account in my work here in Doncaster and in Parliament.

“Over 9 million women didn’t vote at the last general election. I hope that many more will take part this time. I say to those women, ask, argue, question and make demands of politicians – but don’t just believe that ‘all politicians are the same’ – we’re not.  The country faces a big decision – women shouldn’t sit this one out.”

Women’s Aid Chief Executive, Polly Neate, said: “ Survivors of domestic violence often feel like they are in an invisible prison: that no one sees the violence or believe them if they speak out about it. So many women will experience domestic violence in their lifetime, and two women a week are killed by a partner or ex-partner, so it’s essential their voices are listened to. We’re urging all survivors to vote, and most of all, urging every politician to see, hear, and believe the women in their constituencies who are being abused.”

Girlguiding is championing the voice of young women in this election through its Girls Matter campaign. Girlguiding members are calling on all politicians to commit to eight key changes that will improve girls’ lives.* Tackling sexual harassment in school and more women in parliament are among the policy calls from girls and young women. The charity has also launched a new democracy badge called Girls Matter: Hear Our Voice inspiring girls aged 5-25 to engage with democracy and have their say.
Women’s Aid wants all MPs to support victims of domestic abuse in their constituencies by pledging to Hear Her, See Her, Believe Her. They are urging parliamentarians to ensure their constituency offices are a safe place for women to disclose domestic violence, and to include information from Women’s Aid on their websites about how to register to vote anonymously. Women’s Aid wants to see Parliamentarians to commit to supporting their calls for sustainable funding for specialist needs-led domestic violence services and widen the legal aid gateway as these are two of the things that matter most to survivors.

Girlguiding Peer Educator and first-time voter Cassie Galpin, 22 added: “More than 10,000 young women in guiding will be voting for the first time in May. In guiding we passionately believe in bringing about positive change for our peers both here in the UK and across the world.  “All girls need to make voting the habit of a lifetime, to ensure their voices are always heard at the highest level!”

The joint call from Women’s Aid and Girlguiding comes with just under 40 days until voting registration closes on Monday 20th April.