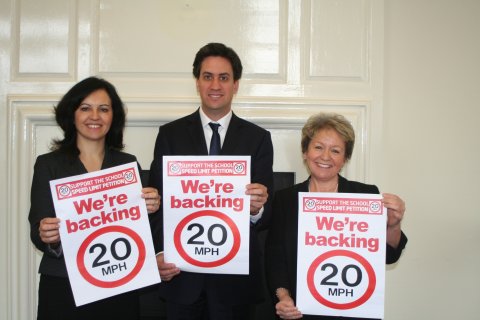 The campaign for lower speed limits near Doncaster’s schools received a boost this week, as Ed Miliband and Rosie Winterton added their support.

Road safety campaigner, Caroline Flint welcomed the news this week: “The backing of Ed Miliband and Rosie Winterton for this campaign is a huge boost.  Now in addition to numerous schools and parish councils, parents know they can count on the continued support of all three Doncaster MPs to persuade the Mayor to sit up and listen.”

Said Ed: “I’m delighted to back the campaign for lower speed limits near schools. It's proven that 20mph zones help reduce the number of accidents. The parents and headteachers I've contacted in my constituency are also very supportive of the campaign. They agree it makes no sense to wait until a serious accident occurs - action should be taken now to reduce speed limits.”

Said Rosie Winterton: “The mood across the country about speed limits is changing. There are more than 2,000 20mph zones and to ask for lower speed limits near schools is a sensible request. I believe parents see this as a positive step.”

Said Caroline Flint:  “The reaction at schools in Don Valley has been very positive.  If so many schools, so many parents, so many parish councils are asking for lower speed limits, why can’t the Mayor simply say – ‘You’re right.  You know what’s best for your children, near your schools’ and back lower speed limits.  So many other councils are doing this – I don’t see why Doncaster should be the last.”

Doncaster has one of the worst road safety records in the country.  Case studies have shown that changes to 20mph has a marked effect on the number of accidents, and the speed at which accidents occur.