Local MPs Caroline Flint and Rosie Winterton attended the Youth Parliament Regional Meeting for Yorkshire and the Humber this week.

Caroline and Rosie were greeted by Doncaster representatives Jasmine Womack from Bessacarr and Leah Wren from Rossington. 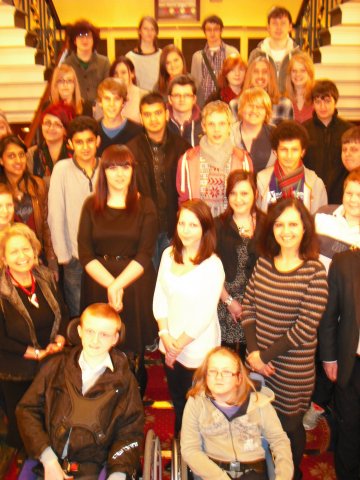 At the meeting, young MPs, aged 14-17 took part in an hour long question and answer session with two of Doncaster’s MPs.  In 2011, the UK Youth Parliament carried out a nationwide poll of over 65,000 young people.  The results identified the top five issues of concern for young people in the UK and members of the Youth Parliament voted on which should be their priority in the forthcoming year.  The UK Youth Parliament’s  ‘National Priority for Young People’ is about making public transport cheaper, better and accessible for all.

Said Caroline Flint “What happens in politics is just as important to young people as for those of us who are older. It was great to discuss the issue of transport; whilst many of the Youth Parliament's concerns are shared more widely the cost of transport for young people is a major issue.”

Rosie Winterton MP said “ Young people across Yorkshire have voted for their Youth Parliament representatives and it was a great pleasure to meet with them here in Doncaster and to have the opportunity to discuss with them their National Priority for the UK and listen to their aims and concerns.”

PICTURE SHOWS: The Yorkshire and Humber Members of the Youth Parliament with Caroline Flint and Roise Winterton