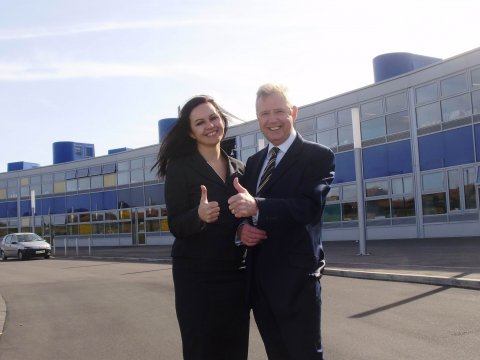 Last July, the Education Secretary announced that he was abolishing Labour’s Building Schools for the Future programme, which sought to rebuild and refurbish secondary schools across the country. Doncaster’s bid – worth £230 million – was immediately halted, leaving Doncaster secondary schools short of money needed for essential repairs.

PICTURE:  LABOUR BUILT THIS - Caroline Flint and Cllr Barry Johnson at Rossington All Saints School, built by the Labour Government.

Caroline Flint and Rosie Winterton met with Michael Gove to object to his decision, taking evidence from secondary schools in their constituencies about the dire straits some had been forced in to due to his decision.

In one school, for example, money used for staffing and resources had to be used to repair the old boiler system. In another school, teachers had to come in during the summer holidays to paint the buildings themselves.

Caroline Flint said: "Doncaster schools were expecting £230 million through BSF to pay for new secondary school buildings. The Tory-led Government scrapped this without any consideration of the consequences.”

Rosie Winterton Said: “Many schools in my constituency had held back on minor refurbishment work to older buildings in anticipation of new buildings through BSF in the near future. As a result, many of these school buildings will soon not be fit for purpose.  This is a disgraceful state of affairs and the Tory-led Government should reverse its decision”