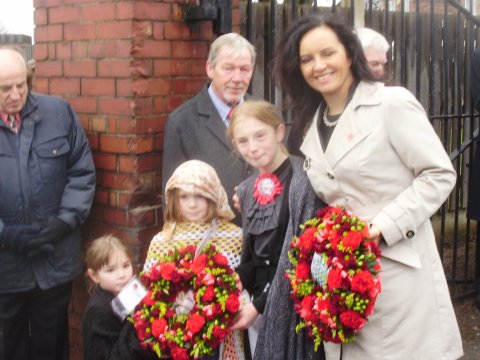 The parade passed through the village, stopping at the original colliery gates, where Caroline Flint and pupils at Edlington Victoria School laid wreaths, before ending at the Yorkshire Main Community Centre garden where the plinth inscribed with the names of the 133 men, was unveiled, by relatives of men named on the plinth.

Speaking at the unveiling, Caroline Flint said: “Today we unveil memorials to 133 men who lost their lives during the lifetime of the Yorkshire Main colliery.  And today, because of the efforts of Frank Arrowsmith, Andy Summers, the Trustees, and their friends and supporters, we can say “Thank You” to those who went to work one day, but did not come home. Today, their history, the people’s history - the history of Edlington is recorded.”

The event was supported by community representatives and miners with banners from all over the UK.  Local representatives who supported the event included Civic Mayor Chris Mills, local councillors Elsie Butler, Bob Johnson and Phil Cole and Cllr Ros Jones who will be contesting the Mayoral election in May.