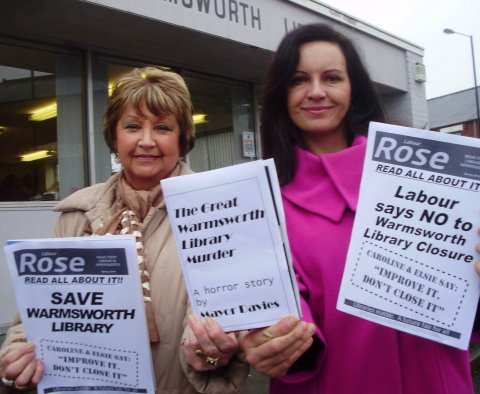 Labour's Caroline Flint and Cllr Elsie Butler launched their campaign to save Warmsworth Library this week.

Cllr Elsie Butler said:  “The proposal to close Warmsworth Library is outrageous.  This is the only library in the borough to have increasing visitors, a rise of a quarter in just two years.

“It is only eight months since the Mayor met the Duke of Kent at the opening of the £7million Martinwells Centre, which includes a new library.  I don’t remember Mayor Davies saying ‘welcome your Royal Highness, thanks for opening this library.  I can shut the one in Warmsworth now.’  I hope the Mayor and his Tory Cabinet think again – this is a betrayal of Warmsworth.”

Caroline Flint said:  “There is no way the Labour Government has invested so much money to provide this new library, just for the Council to close others.  The Government is undertaking a national consultation, which Doncaster Council is taking part in, on how to improve the library service.  What is the point if Mayor Davies has already decided that one in ten libraries are going to shut whatever the public say?

“I say we need to improve Warmsworth library, not close it.”

The campaigners have launched a petition to oppose the closure.

For copies of Labour’s petition to save Warmsworth Library, contact Cllr Elsie Butler on 01302 832206 or elsie.butler@doncaster.gov.uk