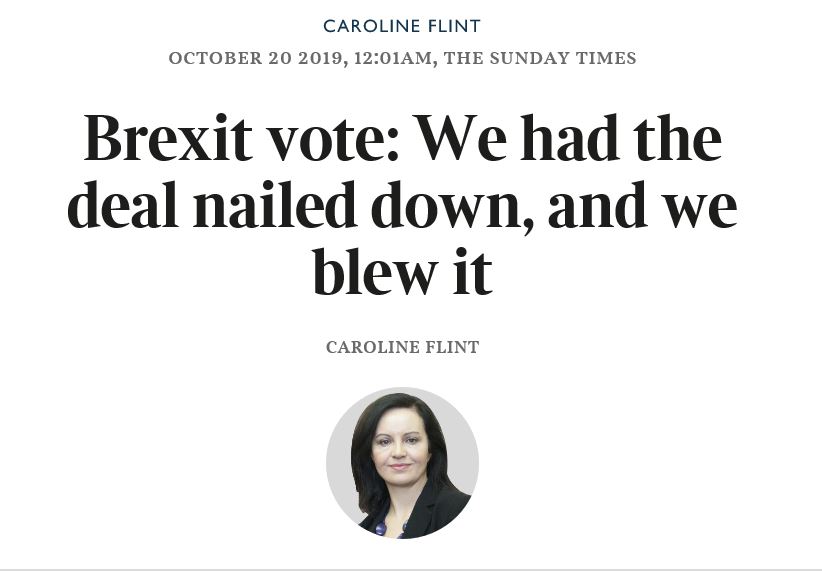 Brexit Vote: We had a deal nailed down, and we blew it.

I attended a miners’ memorial service last Sunday for men and boys who lost their lives during 100 years of serving their industry and nation. For two decades I have stood by these communities.

Through pit disasters, miners’ strikes, recessions and colliery closures, they kept faith with Labour, only ever sending socialists to parliament. My proudest day was becoming the first woman to represent Don Valley.

These communities voted for nationalisation, the creation of the NHS and the minimum wage. For decades, the European Union was not for them. More than 80% of voters in my mining villages voted “leave” in 2016.

More than 1,200 days after the vote to end 46 years of UK membership of the EU, Super Saturday was parliament’s opportunity to end the Brexit deadlock.

Typical of this agonising process, Sir Oliver Letwin and Hilary Benn threw another procedural motion into the mix. They authored the Benn Act, which set a deadline of October 19, one day after the EU Council, to approve a deal.

Nineteen Labour MPs lobbied the European Commission to work night and day if required to secure a deal. A deal was done.

The passing of the Letwin amendment attempted to force a three-month extension — whatever parliament voted for. The “meaningful vote” was duly cancelled. Yet again, those of us seeking a resolution to Brexit have been thwarted.

As an MP who worked in good faith to improve the deal, I feel saddened. Guarantees on workers’ rights, environmental standards and animal welfare, and a guaranteed role for parliament in stage two — all of which we secured — were to be embodied in legislation.

The worst fears of my colleagues would not be realised. No US trade deal importing chlorinated chicken. No scrapping of employment rights. No watering-down of environmental commitments. Not warm words, but legally binding acts of parliament.

We also secured a review of the two-year qualifying period for employment rights, with the option of reducing to one year, and a review of the regulations for employees carrying out public contracts who are transferred to a new employer.

These were real improvements, achieving Labour objectives — measures affecting millions of workers. None of them were really discussed today as the guarantees we secured were ignored.

In a week when we called for an end to intimidation and abuse, I am denounced as a Tory by social media trolls.

Jon Lansman, the founder of Momentum, went so far as to threaten that if any MP voted for the deal “the NEC [national executive committee of the Labour Party] will have no choice but to replace them with a new socialist Labour candidate at the next election”.

As a democratic socialist with 40 years’ Labour Party membership, elected six times to serve as Don Valley’s MP, I received this threat in the same week that Don Valley Labour members overwhelmingly reselected me. Well, I wasn’t elected to parliament to bow to threats and intimidation. I won’t now.

Super Saturday should have allowed us to turn a corner towards an orderly Brexit, by agreement, starting Britain on the path to healing the divisions in our country.

Now we face days of parliament slugging it out over the Withdrawal Agreement Bill, with no consensus in sight.

The public feel MPs should work together to resolve Brexit. Parliament hasn’t been listening. The voices in our mining villages remain unheard, despite their support for Labour over many decades.

For them — and for all the country’s leave and remain voters — we must do better.

Caroline Flint is the MP for Don Valley

This article was first published in the Sunday Times on 20 October 2019.