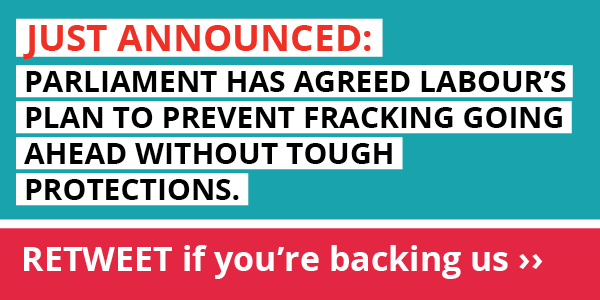 Plans for fracking will face tougher tests thanks to a dramatic Commons victory organised by Don Valley MP Caroline Flint this week.

In a dramatic U-turn, in the face of Labour pressure in the Commons, the Government accepted an amendment tabled by the campaigning Don Valley MP that included thirteen rules that will govern the regulation of shale gas extraction.

The Government’s climb down took place during the passage of the Infrastructure Bill. Speaking after the stunning Commons victory, Caroline Flint said: “This is a huge u-turn by the Government and big victory for the protection of Britain’s environment. Labour has always said that shale gas extraction cannot go ahead unless there is a system of robust regulation and comprehensive inspection, but David Cameron has repeatedly ignored people’s genuine and legitimate environmental concerns over shale gas. Now, thanks to Labour’s amendment, the Government has been forced to accept that tough protections and proper safeguards must be in place before fracking can go ahead.

“While eight out of 10 homes still rely on gas for heating, shale gas may have a role to play in displacing some of the gas we currently import and improving our energy security. But that potential benefit cannot come at the expense of robust environmental protections or our climate change commitments.”

Experts believe that Britain will need gas for decades to come for heating, as well as for electricity generation while renewable sources and technology to capture emissions from power stations are developed. Ms Flint, a supporter of strong action to tackle climate change, argues while Britain must support moves to cleaner energy, we also need to produce our own energy and safe sustainable gas extraction is one of the options for the future. As reserves in the North Sea have fallen, the UK has a net importer of gas for the last decade.

Said Caroline: “No one knows how important shale gas will become; and we have only a few exploratory wells so far in the UK. But before this industry develops any further, we need robust safeguards to allay any fears about pollution or safety. That is precisely what our detailed amendment to this Bill does.”