Should we stay or should we go now?

We do not exist just to work – we want people to enjoy life too. And it is those rights and benefits of EU membership that we take for granted at our peril. 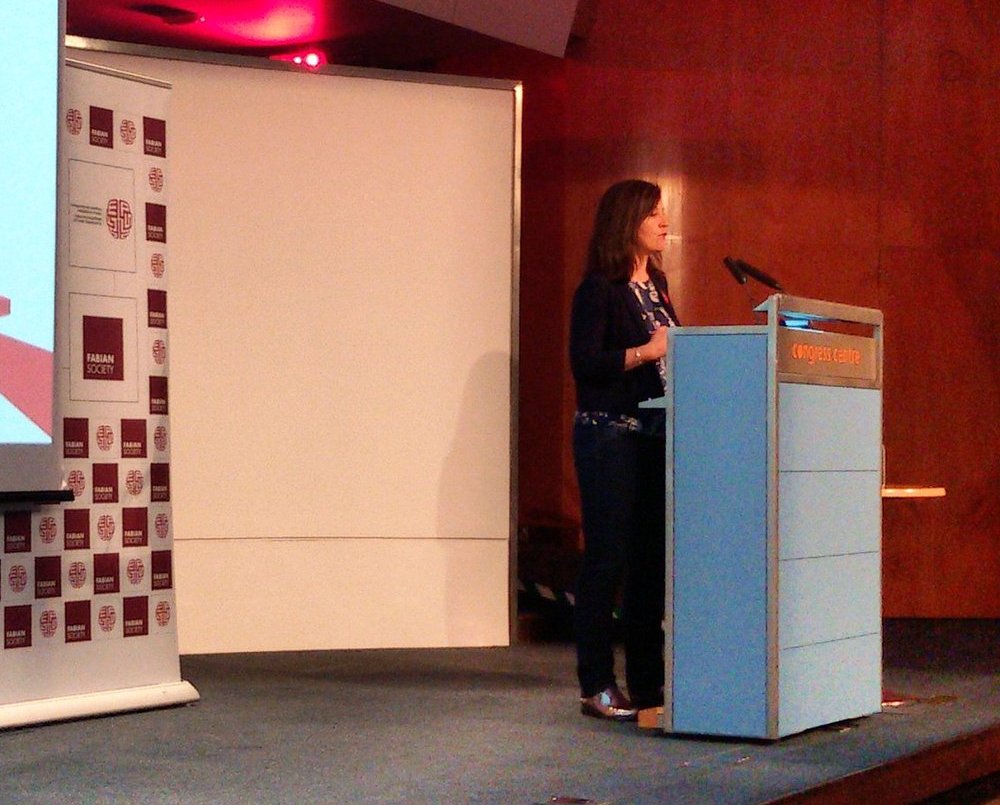 Read Caroline Flint on what people on the left should do about the EU.

But, if you are like me, you love Britain. And I believe our country is stronger as a member of the European Union.

So what are we on the left to make of this debate?

Is it “a bankers and racists’ charter” as the Socialist Workers Party described the Cameron deal with the EU?

Is it a haven of “free market economics that have caused so much damage to our societies”, as the left pressure group Another Europe is Possible would have us believe?

No. Neither of these left views reflect the sum total of the EU’s progress – with Britain’s involvement.

Then we have the Leave campaign with their bright red posters seeking to be the friend of the working class. “Red UKIP” appealing to voters on the left by citing the Transatlantic Trade Investment Partnership (TTIP), threatening our NHS.

A bit rich when you recall UKIP Deputy Leader Paul Nuttall once said"I would argue that the very existence of the NHS stifles competition."

For me, there is a real case for the EU, in keeping with the values of those of us on the democratic left.  Democratic socialists, social democrats – people who believe in using the power of popular governments to reform and shape our world to make them fairer and more prosperous.

The left case – the Labour case – for staying in the EU is overwhelming.

And, yes, I believe many of the arguments we support – can be understood and relate to the lives of many other people, who are not necessarily “on the left”

We cannot just talk to ourselves.

We have just less than three weeks to tell the British people what is at stake.

First, we exist to make our world, and Britain, a fairer place.

And to do so, we want to raise living standards and ensure everyone gains the benefits of a modern society.

When I was a child, only the wealthy could fly abroad.

Today, we have cheap air travel; we are able to stay in touch with home without a £300 phone bill; we have the paid holidays to be able to enjoy those holidays and if we fall ill, we have a European health insurance card to guarantee access to health treatment anywhere in the EU.

We do not exist just to work – we want people to enjoy life too.

And it is those rights and benefits of EU membership that we take for granted at our peril.

I talk about holidays because we need to make sure in our conversations and campaigning we reach out to the people who are still making up their minds how to vote and for whom the debate seems far away from their everyday lives.

It’s worth remembering the difference the last Labour Government made when we signed up to the Social Chapter ensuring every worker won the right to 4 weeks paid holiday.

We enhanced that nationally by ensuring bank holidays were on top of that. Today 7 million more people can enjoy a better holiday.

Decent amounts of holiday pay for all is a relatively recent win, fought for by generations of trade unionists and guaranteed by the EU. Voting to leave the EU risks the paid holiday of millions.

And we know some of the biggest cheerleaders for Brexit see protections for ordinary British workers as just red tape to be binned.

They’ll use immigration as a reason to leave the EU but they don’t want to tackle the exploitation of foreign workers that affects British workers too.

But for the left, the EU provides a powerful place, where with other like-minded people, we can tackle problems that no country could tackle alone.

Back in 1975 I was 13 and I can’t say I remember too much about the last European referendum.

But I do remember caravan seaside holidays in the UK because that’s what we could afford.

What I didn’t realise then was the coldness of the water wasn’t the only factor which should have made me consider whether or not to go into the sea.

In the Summer of ‘75, “Jaws” was the blockbuster film and as I swam in the sea nervously looking out for sharks - I didn’t realise that the real danger was me possibly being up to my neck in s**t.

Yes. To avoid cleaning our waters and beaches the UK Government claimed they weren’t used for bathing, although working class people did because it was often the only holiday choice they had.

Only the 1987 EU threat to sue the UK got the big clean up going so today instead of 30 we have 632 beaches used for bathing with 98.9% of them safe to swim in thanks to EU standards.

Was that EU action a threat to British sovereignty? I don’t think so.

I compare our relationship with the EU to my marriage with Phil.

Sometimes I will pool my sovereignty to sort out a problem but I don’t feel any lesser a person for doing so. A good relationship is when it work both ways.

Let’s talk about how we love the place where we live or spend time and don’t want to lose it.

About the terrible floods we have suffered and how that links to tackling climate change.

Let’s talk about not being reliant on energy from unstable states and how our energy security is stronger and cheaper within the EU.

Let’s shout about the £45 billion pounds of green investment and the jobs already here and to come which exit threatens - like the Siemens Wind Turbine Manufacturing Plant in Hull.

Instead of a race to the bottom – the EU is leading a race to a cleaner, fairer, safer world.

The latest Environmental Audit Committee Report on EU and UK environmental policy stated that “the UK’s membership of the EU has ensured environmental action was taken on a faster timetable and more thoroughly than would otherwise have been the case”.

None of the witnesses even those who made criticisms made an environmental case for leaving the European Union.

And why is that. Because when it comes to protecting our environment borders become irrelevant.

There is no dome we can erect to protect us. Unlike the Brexiters even King Canute recognised the limits of individual power.

The people caught in scams, the vulnerable people trafficked, the young people hooked on drugs.

Rather, it thrives on lack of co-operation and poor governance.

Our co-operation within the EU, the European Arrest Warrant, sharing data on passenger movements, all play a part in redressing that balance.

The EU is not a collection of failed states.

It is not run by warlords.

It is a thriving, meeting place of mature democracies, where the ballot box, not generals or religious fanatics determine what happens.

And, yes, we need to tackle the plight of millions of displaced people from conflicts and do so in a fair, humanitarian way.

There are few easy answers to the refugee crisis.

But it is a myth that it would go away if Britain left the EU.

And the EU would not let the UK trade and gain all the benefits of the world’s biggest free market with a free pass.

Leaving the EU is not a hiding place from the world’s problems on our doorstep.

The left here in Britain should be proud of what Britain has achieved since the end of World War II.

Sometimes the left seem to only recall a great Labour victory in 1945, with the creation of the NHS.

We forget that war consumed the lives of 450,000 British people, and left nearly 60million dead across the world.

Our membership of the EU has helped to forge and cement, peace, co-operation and shared rights.

Rights that every British person and every family gains from, whether they know it or not.

We should be proud to say we love Britain, we value our place in the world and both Britain is better off in Europe and the EU is better for having Britain as a member.

Waking up to find that Britain has voted to leave the EU will place everything we may have taken for granted being up for grabs.

But if we vote to stay as I passionately hope we do.  A renewed Labour case for the EU being a more effective and in touch union needs to be made.

Because we all need to ask ourselves how has Britain come to this point, that regardless of all the benefits of EU membership, this referendum is so close?

Immigration has become the place for those who want to leave to place the blame. But the failure is not the European Union’s but ours.

For many years I have spoken out about people’s insecurities about jobs, housing, public services and the future, especially in the parts of Britain where we don’t live in metropolitan cities.

Labour voters and others for whom the benefits of globalisation seemed to have passed their town by. Communities where they have been left adrift and government has failed to use power nationally or in Europe to forge a new industrial and jobs strategy

These people are not racist.  They want fairness.

Where the benefits of immigration to employers and to the tax take of the Treasury are matched by a greater amount of tax supporting communities with additional pressures on housing, schools and health services.

Where we can openly discuss the benefits of migration including the many businesses and jobs European migrants have created in Britain but not ignore it when it is causing problems too.

We need to know is it a perception or reality that Brits aren’t getting the jobs filled by European migrants? Are Brits being turned down or not applying?  Is it happening in some sectors and why?

For some maybe Britain is an attractive place to come because of our benefit system, although for many I don’t think it’s as attractive as they think when they get here.

There is fraud and paying off the books but that happens with British people too - working illegally, sometimes with bad employers or organised criminal networks behind them calling the shots.

For many more it is because of the work available and that English is the international language. Young workers paying their taxes, working hard, living in the private rented sector and because of their age not big users of the NHS just like British young people.

Change is not as easy for some as others. To leave won’t solve that.

As a country we need to face up to our responsibilities instead of blaming the EU.

Most of all let us not let the Leave campaign claim they are more patriotic than those who want to remain.

We must not let them.

I love Britain and we will continue to be a strong proud nation.  But we are stronger as members of the European Union.

As it says on my Labour party membership card, ‘By the strength of our common endeavour we achieve more than we achieve alone’.

Never has this been truer than when it comes to the strength we gain from our common endeavour as members of the European Union. So let’s get out there and win this campaign.