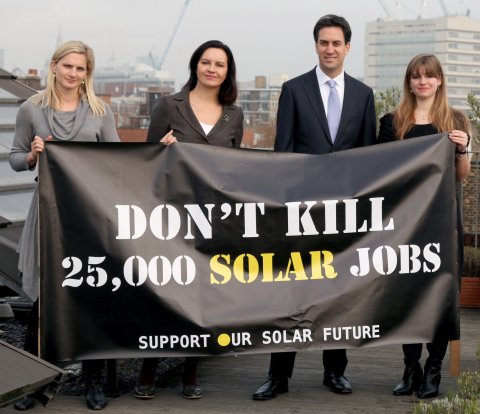 The Government’s plans to cut support for solar power will be put to the test in a showdown in the Commons, after Caroline Flint MP, Labour’s Shadow Energy and Climate Change Secretary secured an Opposition Day Debate on Wednesday 23 November 2011.

Just in the past week, proposed Government cuts to the feed in tariff, which take effect on 12 December, has led to Doncaster’s Mayor and Tory-led Cabinet cancelling a solar pv scheme for over 500 homes in Doncaster.

Caroline Flint MP, speaking ahead of the debate and launching Labour’s ‘Save our Solar’ campaign, said:

“The Government’s cuts to feed-in tariffs are a disaster for Doncaster.

"Halving Feed-in Tariffs will hit families, put thousands of jobs at risk and destroy the solar industry. This is just the latest example of a government which is out of touch, cutting too far and too fast, with no plan for jobs and growth. They must think again, revise their scheme and extend their tariff deadline.

"On Wednesday MPs will have the chance to vote on the Government’s plans. Every part of the country will be hit if these proposals go ahead  – so I’m calling on all MPs to put aside party loyalties, stand up for their constituents and get behind Labour’s ‘Save our Solar’ campaign."

So far, over 1,100 Doncaster families have installed solar panels under the Feed-in tariff scheme introduced by the Labour Government and launched by Ed Miliband in February 2010.

The Government is proposing to cut domestic feed-in tariffs from 43p per kwh, to 21p; and for social landlords the cut will be from 43p to 15.8pence.