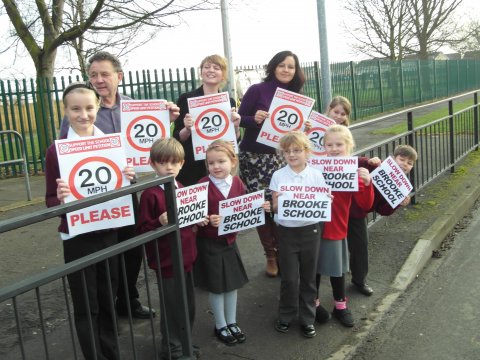 Doncaster’s MPs have welcomed moves to improve road safety near the Borough’s schools, as the first nine schools to have 20mph limits was confirmed.

“This announcement is a welcome step in the right direction.  After 12 months campaigning for lower speed limits near schools, Mayor Davies turned his back on the proposal.

"In contrast, the new Mayor has shown that she is listening to parents and wants to do something about it.  It also shows all of those people who have signed petitions that their efforts are not being ignored.

“I believe that even during very tough financial times, Doncaster – like many other good councils – can afford to introduce 20mph zones near schools.

“I look forward to meeting the Mayor and Cabinet Member, Cllr Bill Mordue, to discuss how the Council is going to support those schools with the most serious traffic problems.”

PHOTO SHOWS: Caroline Flint, Cllr Rachel Hodson and school governor Ivor Ridgill with pupils at Thorne Brooke Primary school – one of the first  in the new wave of 20mph zones.

Doncaster North MP Ed Miliband said: “I welcome Mayor Jones’ plans. It’s proven that 20mph zones help reduce the number of accidents and the parents and headteachers I’ve contacted in my constituency are very supportive of the campaign.” 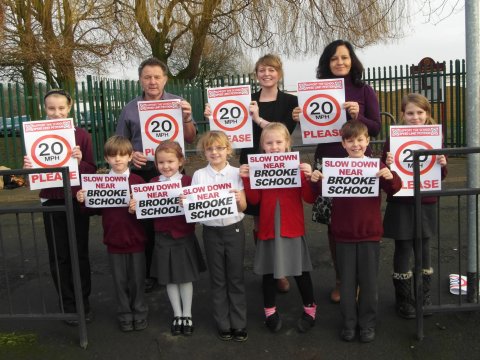 Councillor Bill Mordue, Cabinet Member for Highways at Doncaster Council, said the aim is to make the streets of Doncaster safer for children.

He said: “The Council is committed to a scheme to reduce speed limits outside schools. We know how important this is to parents and of course to children.
“We know for roads in general, reducing speed limits by just 10mph makes a massive difference to the stopping times of vehicles, cutting the risk of serious accidents by more than a third.
“We want the new limits to send a clear message to motorists to slow near schools.”

The nine initial schools where the Council is proposing to introduce 20mph limits are:

It is Doncaster Mayor Ros Jones’ aim to make road safety changes outside every school over her term in office.

She said: “The safety of our children must be a top priority – we want to reduce the risk of accidents.”