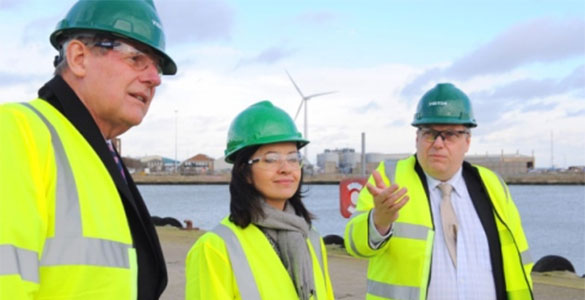 In my London childhood we never owned a home, living mostly in flats, apart from some years in a terraced street. In front a narrow road with the railway line beyond - behind narrow gardens with an alley. Children would be in and out of each other's gardens when we weren't off to the park or down to the river.

Now living in a former mining constituency I have learnt how much rural mining villages value their surrounding countryside.

Everyone should have access to nature and green spaces whoever they are and wherever they live if we truly believe in equality. Labour can be proud of it's record from establishing national parks and the green belt to right to roam and action on climate change.

A big success as an MP was the saving of Thorne & Hatfield Moors from industrial peat digging. With over 5,500 species of insects, one per cent of Britain’s breeding nightjars and a rich archaeological treasure, it is the last remnant of wetland that used to stretch to the Humber Estuary. Campaigning with local people, groups and Friends of the Earth we got the Labour Government to buy out Scott's ending peat working. Now in public ownership we have an education programme and I continue to campaign for EU funding to restore this precious habitat.

At Health I worked with Groundwork, local government and others to make the environment outside people's homes integral to tackling health inequalities. For 6 years, I have been a volunteer transforming a local brick pond.

On Energy and Climate Change policy, I have worked closely with SERA and its members. I have been proud to speak at and support your rallies and events.

The Green Plan I published before the General Election was full of lots of SERA thinking and policies we developed together at the National Policy Forum.

I won over the Leader's office, the Shadow Cabinet, and our Treasury team for these policies.

In the past many SERA members have felt frustrated that environmental issues have been not been given the prominence they deserve. But decarbonisation of the power sector, more powers for the Green Investment Bank or ending the scandal of cold homes have not been marginalised. Speaking to a broad cross section of society as well as committed environmentalists.

We can save our planet and create a new cleaner economy which provides much needed jobs and skills whilst tackling fuel poverty across our country.

For Labour to succeed we need to provide real community leadership especially where we haven't an MP. A grassroots movement not a Westminster elite.

Sera will have a champion in me. A doorstep and community campaigner, someone fighting our corner in the media and with the empathy to reach out to voters beyond our core vote.

With your support I can be Labour's Deputy Leader and help us win in 2020.

This article first appeared on sera.org.uk.